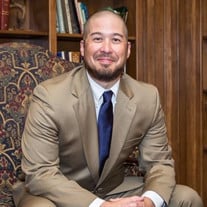 On Monday, April 20, 2020, William John Zielinski, adoring husband and father passed away at the age of 45. Will was born October 8, 1974 at Travis Air Force Base in a Fairfield, CA hospital; not on a C-130 airplane as he has jokingly told his children. Will spent his younger years living on various bases around the US and around the world; his favorites being Ramstein Air Base in Germany and Tyndall Air Force Base in Panama City, Florida. Will attended the University of Texas at Arlington and fulfilled a promise to his mother by later completing his degree in Computer Sciences. He worked in auto finance for over 25 years, at Wells Fargo Dealer Services and most recently at GM Financial where he was known to always have a smile on his face and maybe a practical joke up his sleeve. Will recently joined the Board of TransformUs Movement, a non-profit organization that empowers young adults to use their unique talents to serve their communities and bring reconciliation to our world. On September 24, 2016, he married the “girl of his dreams,” Bryann Owen Zielinski, in a small ceremony at a beloved family ranch in west Texas. On February 17, 2017, Will adopted Bryann’s two daughters and along with his three children, they lovingly completed their team Z family. They raised their blended “brady bunch” in North Richland Hills, TX. The kids attended Keller ISD schools and worshipped together at the Hills Church of Christ. Will had a passion for his family and for the outdoors. He also loved to help people. Will was always at the ready to jump in when friends, family or strangers needed help, going so far as to help save a man’s life by assisting a paramedic when he came upon a car accident. Will loved all things outdoors including hunting, fishing, camping and hiking. He once made his new bride hike 18 km up a mountain to reach a glacier lake in Canada after mistakenly telling her it was only half that distance. Will also enjoyed Texas country music, Crown Royal Canadian Whiskey, relaxing on a patio with friends and playing ball with his dog, Faith. He was known for his good-natured ribbing, infectious smile and being the fun uncle who always had candy or mints. Anyone who spent more than 5 minutes with Will knew how much he deeply loved his family. His wife and his kids were his whole world. Will was preceded in death by his two infant daughters Madeline & Lauren. He is survived by his wife, Bryann, his children, Megan, Kaylin, Brinkley, Nolan and Brooklyn; his parents, George and Yueh Zielinski; his sister and her husband, Kim and Jim Thompson and nephew Michael. He is also survived by his mother and father in law, Marilyn and Dean Owen, Bryann’s sisters and their husbands, Brooke Schubert and her husband Phil, Bria Jordan and her husband Brent, and Bryann’s brother and his wife, Trine and Sharon Owen, along with 10 additional nieces and nephews. A memorial service will be scheduled once Covid-19 restrictions are lifted allowing for larger gatherings. In lieu of flowers, please consider giving to TransformUsMovement at 609 E. Main St. Arlington, TX 76010 or to the GoFundMe: Lifting Up The Zielinski Family. We are going to have a memorial service for Will on Saturday May 16th at 11:00am at the Hills Church of Christ in North Richland Hills 6300 NE Loop 820 North Richland Hills, 76180. We will be following safety guidelines to insure everyone's health and wellbeing while we celebrate the life of Will. https://livestream.com/thehillschurch/events/8629230/

On Monday, April 20, 2020, William John Zielinski, adoring husband and father passed away at the age of 45. Will was born October 8, 1974 at Travis Air Force Base in a Fairfield, CA hospital; not on a C-130 airplane as he has jokingly told... View Obituary & Service Information

The family of William John Zielinksi created this Life Tributes page to make it easy to share your memories.

Send flowers to the Zielinksi family.