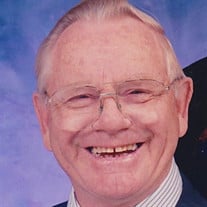 With his family by his side, William Edward Reitsma, 88, died Monday, January 22, 2018, at the Community Hospice Center in Fort Worth, Texas. He knew he was cherished and loved. William had several nicknames, and was affectionately called Chester, Bill, Billy, Wild Bill, Uncle Bill, and Sweet William to name a few. He was born on April 27, 1929 in Bigelow, Minnesota, and was the ninth of eleven children born to Peter and Maggie Reitsma, who predeceased him. In his early years he helped his father in his blacksmith shop, and later worked for Billy and Minnie Blume on their farm. William was a military veteran of over twenty years. He enlisted in the U.S. Air Force (then called the Army Air Force) in 1947, and served in both the Korean and Vietnam wars, before retiring in 1968. While stationed at Carswell Air Force Base in 1951, William met his wife, Mona R. (Mitchell) Reitsma. She was the great love of his life. They were married for 62 years and had four children, and two grandchildren. Upon his retirement from the military in 1968, William and Mona moved to Plainfield, Indiana where he worked for Hoosier Aircraft in Indianapolis, Indiana for eight years, another two years in California for Precision Aero, and finally settled in Fort Worth, Texas, where he would finish his working years employed at General Dynamics (now called Lockheed Martin) from 1979 to 1993. He always said his last job was the best job he ever had. He traveled all over the world, during his military years, and later would travel to many different locations in the United States, as well as, Korea and Japan while working for General Dynamics. Traveling has a huge part of William’s life. Always planning a trip. He and his wife would make it a point to stop along the way to see as many family and friends as possible, since our family has become scattered all over the country. Lots of family reunions along the way. William enjoyed a long retirement, and was able to travel for many years. Family and friends were his pride and joy. William was the favorite Uncle for many of his nieces and nephews, and many have shared treasured memories of him. He enriched the lives of the people that knew him best. He never had a bad word to say about anyone. Always encouraging and fun, a great listener, could tell a good joke, and share a big smile. In addition to traveling, some of his favorite pastimes were listening to audio books, playing games on his computer, watching movies and sports on television, listening to music, and gardening. William was preceded in death by his wife, Mona R. Reitsma, and two sons, Randall E. Reitsma and Clifford W. Reitsma. He is survived by his daughter Patricia L. Reitsma, his daughter-in-law Rosa Reitsma, and his son Russell W. Reitsma and his wife Eileen Reitsma, and his two grandchildren Joseph W. Reitsma, and Jillian K. Reitsma. William’s final wish was to be cremated, and a memorial service will be held at his daughter’s home located at 16 Beechcreek Drive, Fort Worth, Texas 76134. The service will start at 2:00 p.m., on Saturday, February 24, 2018. Guardian Funeral Home has been entrusted with the arrangements, and his interment will be at the Thorp Springs Cemetery located in Thorp Springs, Texas.

With his family by his side, William Edward Reitsma, 88, died Monday, January 22, 2018, at the Community Hospice Center in Fort Worth, Texas. He knew he was cherished and loved. William had several nicknames, and was affectionately called... View Obituary & Service Information

The family of William Edward Reitsma created this Life Tributes page to make it easy to share your memories.

With his family by his side, William Edward Reitsma, 88, died...

Send flowers to the Reitsma family.