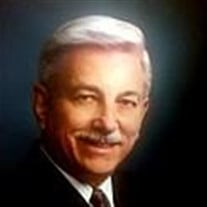 Judge William (Bill) Tecumseh McGee, 87, passed away on Thursday, February 28th, 2019. Service: A celebration of his life will be held at 3:00 p.m. March 23, 2019 at the Church of The Holy Apostles; 3900 Longvue Ave. Interment will be in the church columbarium followed immediately by a reception in the parish hall. In lieu of flowers, donations may be made to the Holy Apostle or the charity of choice. Bill was born in Fort Worth on November 24, 1931 to Beatrice Miller McGee and Judge David McGee. He attended Castleberry and was Salutatorian in his freshman year. He graduated from North Side High School in 1949 with honors. He then attended North Texas State University in Denton studying Pre-Law. In his sophomore year, he joined the U.S. Marine Corps. During his assignment to Philadelphia, PA., he met his future wife, Jeanette Charlotte Tindall. They were married Oct. 3, 1953 in The Church of the Holy Apostles and the Mediator in Philadelphia, PA. In 1954 they came to Fort Worth. He resumed studies at North Texas State University and continued there after the birth of his daughter, moving to Austin to attend the University of Texas Law School until his graduation in 1957. Bill remained in Austin for over a year serving as a briefing clerk for the Texas Supreme Court. He then joined a law firm, and returned to Fort Worth after the birth of his second daughter. During these years, he continued his membership at All Saints Episcopal Church where he was a vesting member. Bill read morning services every Friday, was a Lay reader for 10 years, taught Sunday school, was a member of the Men’s Club and the Outreach Committee. For several years he was the Chancellor for the Episcopal Diocese of Fort Worth. The Rector, Father James P. DeWolfe, asked Bill to start a mission on the west side of Fort Worth where he lived. Bill and his wife, along with six other couples became the Founding Members of the Church of The Holy Apostles. They were active on the Vestry and he was the first Senior Warden and continued to teach Sunday school. Part of his duties as the Chancellor for the Diocese was traveling with Bishop Iker on church matters and attending annual Episcopal Conventions. During this time, as he advanced his career, he was a member of Toastmasters, served on the State Bar Grievance Committee, and served one year as President. He was one of three young men nominated for “Outstanding Young Man of The Year,” in Fort Worth in the 60’s. He was an active member of the West Side Lion’s Club, coming up through the chairs and being elected President in 1967. He went on to run a successful campaign in 1969 for Fort Worth Probate Judge and served for five years before returning to private practice. For the rest of his career he specialized in Estates and Probate law. In the later part of his 62 years as an attorney, he traveled all over Texas as a visiting Probate Judge where the existing Judge was recused from a case. A friend suggested Bill have a business card that read “The gavel, will travel.” He and his family enjoyed boating, water skiing, camping, traveling and snow skiing. He and his wife were members of The Dallas Ski Club. Bill enjoyed gardening and bowling with his Lion’s Club friends. He often went on weekend hunting or fishing trips with other Judges and friends. He also hunted and skied with his son. Bill and his wife enjoyed many family reunions all over the eastern coast and Texas. He is preceded in death by his beloved wife of 65 years Jeanette Tindall; parents, Beatrice Miller McGee and Judge David McGee; three brothers, James David McGee, Joseph Bert McGee and Robert Soloman McGee; one grandson, Jeremy Tyler McGee. Survivors: Children, Janel Cynthia Buehler, her daughters Jackie and Cassey; Michelle Susan Kells and her husband Chad; Pamela Anne McGee and her daughter, Hilary; Mark David McGee and his children; Carly, Katherine, Mary and David; Angela Ruth Slovak and her husband Joseph and their children Zachary and Vivian. Also surviving is his brother, John Sampson McGee and his wife Shirley and his sister, Mary Ruth Phillips. He had five children, nine living grandchildren and four great-grandchildren as well as many nieces and nephews.

The family of Judge William (Bill) Tecumseh McGee created this Life Tributes page to make it easy to share your memories.

Send flowers to the McGee family.