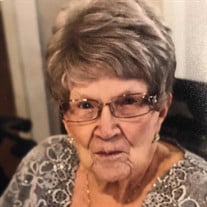 Virginia “Jenny” Lois Younglove Roaten was born in Burkett, Texas January 14, 1925 to Alfred McKinley Younglove and Gladys Oma Hickson-Younglove. Jesus opened heaven’s door to welcome Jenny on March 9. Their dad died when she was very young and she grew up being raised by a single mom on the farm. They produced anything from tomatoes to cotton. She grew up with one older sister, Dorothy Younglove Adams, and two younger brothers, Ben and James Younglove. Virginia came to a saving faith in Jesus Christ at age 6 and was baptized in the Baptist church in Burkett. She reaffirmed her decision once more at Sagamore Hills Baptist Church in Ft. Worth. The Youngloves’ lost their home in a fire when she was 12 years old. Uncle George paid for the lumber to rebuild the small house. He also paid the $95 each for Dorothy and Virginia to go to nursing school at the Shannon-West Texas Memorial Hospital School of Nursing. Virginia graduated from Burkett High in 1942 and received her nursing degree in 1945. All four of the Younglove children grew up to be professionals in their respective fields of nursing, administration and university education. Jenny married a strapping Army Air Corp soldier John Roaten in 1944. The wedding was conducted on January 1 in San Angelo Texas by the Baptist preacher Dr. AC Donath and witnessed by his wife. They had been married 64 years in 2008 when John died at the age of 90. The Roaten’s lived in many places in Texas until they settled in Ft. Worth in 1956. They started out in San Angelo but soon moved to Austin Texas for John to finish his pharmacy degree. Virginia worked full time at Brekenridge Hospital and not long after moving there they gave birth to their first son Norman Paul Roaten. That was April 20, 1948. The pharmacy job moved them to Tahoka, Texas where they gave birth to a second son James “Jimmy” Byron Roaten January 10, 1951. In 1953 they moved to Rockport, Texas where John joined his brother Shelly Poe at the Roaten Pharmacy. They moved to Kerens, Texas in 1954 then back to Austin in 1955. Then they made the final move to Ft. Worth. Their youngest, a girl, was born April 22, 1957 at Harris Hospital in Ft. Worth, Laurie Ann Roaten-Childers. Jenny enjoyed making clothes for her daughter. They had a special relationship. Virginia and John both worked at Harris Hospital in Ft. Worth until retirement. Jenny’s years of service were 1957-1990. She spent most of her career in Labor and Delivery. They loved traveling and in later years traveled with her sister and husband Hollis and Dorothy Adams. They went to England, Scotland, Germany, Italy and Greece. They had a most memorable trip to Israel. She and John went to Hawaii when her nephew was married. Virginia was a seamstress, avid reader, Dr. Phil follower, note taker, news bug, and prayer partner. She made bears, Christmas stockings, nursing scrubs to match the season, and patched everything needed. She loved watching programs in which workers built cabins in Alaska and fix up old houses in New England. She saw humor in so much. She read the Ft. Worth Star Telegram every morning. She was forthright and frank. Virginia loved photos and creatively would stick cartoon bubbles on pictures with funny captions. She always dated and described the picture on the back. She loved and supported her Church, “Fielder Church,” and was a faithful member of Bob Miller’s Sunday school class. She was also a part of LLL, a senior adult gathering focused on fellowship and ministry. The greatest generation. Virginia enjoyed the Town Village Crossing (https://www.pegasusseniorliving.com/town-village-crossing/ ) community where she lived since March of 2020. The family is appreciative of how she was cared for at Town Village and for the services of Liberty Hospice of Farmers Branch, Texas (http://www.liberty-hospice.com/ ) in her final days. Virginia is survived by her sons Norman Roaten and wife Jo of Arlington, Texas; James Roaten of Ft. Worth, Texas; daughter Laurie Childers and husband Wayne of Oklahoma City, Oklahoma. Five grandchildren: Dana Ortega and husband David of Virginia Beach, Virginia; David Roaten and wife Tiffany of Arlington, Texas; Amy Butler and husband Chuck of Springdale, Arkansas; Carrie Patterson and husband Walter “Bo” of Kaufman, Texas; Andrew Childers and wife Lauren of Amman, Jordan. She is survived by eight great grandchildren Peter, Wesley, Macon, Ellie, Wrigley, Deacon, Zane and Lily. Virginia is also survived by her younger brothers James and Ben. She is preceded in death by her parents, her husband John, sister Dorothy and daughter-in-law Sue. Interment will be at Grand Prairie National Cemetery. The time and date will be announced. In leu of flowers the family requests that gifts be made in her honor to Mission Arlington (https://missionarlington.org/).

The family of Virginia "Jenny" Lois Younglove Roaten created this Life Tributes page to make it easy to share your memories.