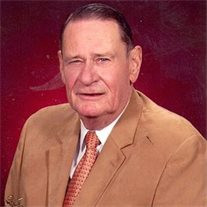 FORT WORTH -- Steve Rogers died peacefully in Fort Worth on Friday, Oct. 7, 2011. Memorial service: 10 a.m. Tuesday, Oct. 25, at First Presbyterian Church, 1000 Penn St., Fort Worth, with the Rev. Karl Travis officiating. Memorials: charity of choice. Steve was born in Enid, Okla., in 1929. He graduated from Oklahoma State University. Steve lived for several years in Venezuela and Colombia. He worked as an estimator for Martin-Marietta in Denver from 1960 to 1976 and for General Dynamics in Fort Worth from 1978 to 1991. Steve was very active as an elder in First Presbyterian Church. He volunteered for Habitat for Humanity, Meals on Wheels and the Night Shelter. Steve was preceded in death by his parents, Hugh and Temple Rogers, and brother, Bruce Rogers. Survivors: His wife of 58 years, Mary Lou Rogers; son, Alan Rogers and his wife, Susan Rogers; son, John Rogers and his husband, Timm Zitz; daughter, Carolyn Rogers and her husband, Tom Stepien; sister, MaryBelle Meade; grandchildren, Michelle, Alexander, Stephanie, Amy, Isabelle and Andrew; and great-grandchildren, Julian and Elias.

The family of Mr Steve Rogers created this Life Tributes page to make it easy to share your memories.

FORT WORTH -- Steve Rogers died peacefully in Fort Worth on Friday,...

Send flowers to the Rogers family.