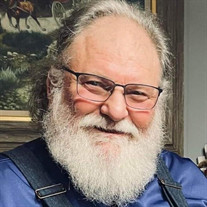 Stephen “Steve” Larson, at 65 years old left this world on January 28, 2022 surrounded by his family. Steve was born on December 24, 1956 and grew up in Benbrook, TX. He attended Western Hills High School class of ‘75. Steve worked as a forklift mechanic for 43 yrs. He had a passion for “fixing things”. There was not much he couldn’t fix. Steve was an avid saltwater fisherman. He enjoyed riding his “mean green” Harley. He participated in multiple charity toy rides. His all-time favorite pastime was being with his family. He often said “I am the happiest when all my kiddos are under one roof”. Steve was also known to coach his daughter’s t-ball, softball and soccer teams. Later he would be an active participant and spectator for his grandchildren’s dance recitals, t-ball, basketball, and football games. In his later years he developed a passion for playing Santa, he was a natural. He was the best Dad and Pappy, and he will be greatly missed. Steve was preceded in death by his father, Walter Larson; mother, Carroll Larson, brother Richard Larson, and brother in law Thomas Parnell. He is survived by his long time companion: Nancy Ballinger of Burleson, daughters: Angela Larson of Fort Worth, Angela Waters of Wylie and husband Duane, CJ Johnston of Cleburne; son: Adam Ballinger of Arizona and significant other Felicia Bates; his 10 grandchildren: Madilynn Larson, Alyssa Santangelo and significant other Bryce Miller, Sarah Santangelo and fiancé Devyn Howard, Paige Johnston, Jake Johnston, Kenlee Waters, Emmalynn Johnston, Knox Johnston, Grey (his best friend) Johnston and Everlee Ballinger; his 3 great grandsons Hudson Winn, Henry Winn, Karter Howard. Steve leaves behind siblings, brother: John Larson and wife Mary, sisters: Pam Parnell, Cathy Awtrey and husband Allan; sister-in-law: Elizabeth Larson. There will be a Celebration of Life to honor Steve at Altamesa Church of Christ on February 12, 2022 @ 2pm.

The family of Stephen Larson created this Life Tributes page to make it easy to share your memories.

Send flowers to the Larson family.