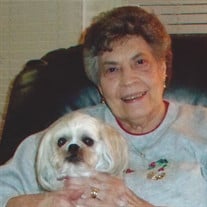 Ruth Evelyn Watry, 84, passed away on Saturday, December 26, 2015. She was born on December 19, 1931, in Spring Grove, MN, to Christian and Winifred Casey Teff. Ruth, the oldest of 12 children, grew up on a farm in Dorchester, IA. She graduated from Waukon High School in 1949. After moving to Janesville, WI, Ruth went to the Janesville Vocational School and was hired by General Motors for her exceptional comptometer abilities. She then married the love of her life, Earl Nicholas Watry, on January 17, 1953 at St. Patrick’s Catholic Church in Janesville. Ruth and Earl were active members of St Mary’s Catholic Church in Janesville for many years, where she enjoyed singing in the church choir. In the summer of 1980, St. Pope John Paul II invited her to the Vatican as his guest. Ruth had an audience with the Pope at his summer residence in Castel Gandolfo. Ruth retired after 20 years of employment with Wisconsin Bell, and soon after she and Earl moved to Fort Worth, TX to be closer to their children and grandchildren. Ruth was especially dedicated to her family, to whom she loved and was loved. She was a great cook, who truly enjoyed politics, music, sports, and conversation. For many years, Ruth courageously fought diabetes and COPD. On her last full day, she spent Christmas giving generous gifts to her children, grandchildren, and friends. Her great intelligence, integrity, honesty, moral toughness, sensitivity, and spirituality stood out in a world lacking many of these qualities. Ruth is survived by her children: David M. Watry of Irving, TX, Debra (Don) Weidenfeller of Spring, TX, and Dianne (Karl) Bilbrey of Flower Mound, TX. She is also survived by four grandchildren: Christopher Ross Nichols of Houston, TX, Michael Weidenfeller of Spring, TX, Rachel Weidenfeller of Spring, TX, and Erin Nichols of Lewisville,TX; sisters , Marianne (Walter) Mahr of Dorchester, IA, Phyllis (Richard) Knopes of Janesville, WI, Marlene (Robert) Meiners of Caledonia, MN, Suzanne ( Dennis ) Breshnahan of Dorchester, IA, Janet (William) Majhenich of Milwaukee, WI, Barbara (Mark) Williams of Lansing, IA, brothers Harold (Donna) Teff of Savage,MN, and John (Paula) Teff of San Tan Valley, AZ; sisters-in-law, Jean Watry-Melsheimer of Port Washington, WI, Lorraine Watry of Port Washington, WI, and Joan Watry of Neshkoro, WI, and many nieces, nephews, and friends. She was preceded in death by her husband of 56 years, Earl Watry, parents Christian and Winifred Teff; brothers, Gerald Teff and Robert Teff, and her sister Jean Fetting. A celebration of life Mass will be held 10AM. Monday, January 11, 2016, at St. Philip the Apostle Catholic Church in Lewisville, TX followed by interment in Dallas-Fort Worth National Cemetery in Grand Prairie, TX. Guardian Funeral Home of Fort Worth, TX, is assisting the family.

Ruth Evelyn Watry, 84, passed away on Saturday, December 26, 2015. She was born on December 19, 1931, in Spring Grove, MN, to Christian and Winifred Casey Teff. Ruth, the oldest of 12 children, grew up on a farm in Dorchester, IA. She graduated... View Obituary & Service Information

The family of Ruth Evelyn Watry created this Life Tributes page to make it easy to share your memories.

Send flowers to the Watry family.