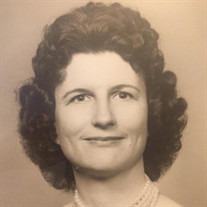 Ruth Hogan Badgero, longtime Fort Worth resident, received her “final promotion” on March 19, 2021, in Fort Worth at the age of 93. Graveside service will be held Friday, April 9, 2021, at 1 p.m. at Laurel Land Fort Worth with Rev. Frankie Rainey officiating. I Corinthians 2:9 “But as it is written, Eye hath not seen, nor ear heard, neither have entered into the heart of man, the things which God hath prepared for them that love Him.” KJV Ruth was born in Fort Worth September 21, 1927 to Pete and Willie Hogan. She grew up on Pershing Street and graduated from Arlington Heights, Class of ’44. She married Jack Badgero on September 16, 1960 in Fort Worth. Together they pastored churches and ministered for many years. In 1964, Ruth and Jack were involved in a near-fatal automobile accident near Graham when a drunk driver crashed in to their vehicle. Ruth took the brunt of the impact however, she miraculously survived and after many months she recovered with no serious complications. They eventually settled in Fort Worth near family and Jack continued to minister as an evangelist throughout the country. Ruth was a faithful servant and great asset to their ministry. Ruth was such a dear - a powerful prayer warrior, teacher, encourager, and sweet friend to so many. She had a thankful heart and was always, without fail, thanking the Lord for His faithfulness. A woman of great faith, she had the ability to truly cast her many cares on the Lord and leave them there. Ruth was always looking for people to minister to and pray for. Even in her later years, as much as her health allowed, wherever she happened to be she was sensitive to the spiritual needs of those around her. She was a compassionate and caring woman who loved people, loved to laugh, and enjoy life. She was fond of telling people “I sure do love and appreciate you” and she meant it. She was preceded in death by her parents, brother Charles, and husband Jack in 2004 after 44 years of marriage. She is survived by her friend Sue Duncan.

The family of Ruth Hogan Badgero created this Life Tributes page to make it easy to share your memories.

Send flowers to the Badgero family.