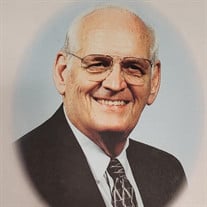 Robert Hudson Tinius, 91, was born in Oklahoma City to G.R. and Ruby Love Tinius. He grew up in Tulsa, where his father not only ran a leather business, but served several congregations of the Church of Christ as a part-time minister. Bob and his two siblings were raised by God-fearing and servant-hearted parents. He graduated from Central High School in Tulsa in 1948, participating in many activities, including gymnastics and Opera Club. Bob attended Abilene Christian College from 1948 to 1952, where he met a special red-headed girl the first day on campus. He was a roadie for the Nauseating Nine, a member of Sub-T 16 social club, sang bass in the A cappella Choir, and obtained a degree in Music Education. After Bob and Peggy married in August of 1952, he continued his work as an evangelist and minister of the gospel in Texas, Kansas and Oklahoma until 1968. He then served as an elder at the Ridglea West and West Freeway congregations of the Church of Christ from 1969 until 2012. He also served on the Board of Directors for both Southwest Christian School and The Gospel Minutes in Ft. Worth. In 1968, Bob and Peggy established Tinius Wholesale Floral Company in Fort Worth, where he worked almost every day for the rest of his life. They were active members of the Ft. Worth Floral Association as well as being involved in community activities such as the Ft Worth Civic Orchestra. Singing was a part of Bob’s life since childhood. He used his God given gifts to lead songs in worship and participated in many musical endeavors and choruses. Other interests included cars, all things mechanical, and woodworking and watching sports. In working with plants, Bob experienced great joy in the beauty, scope, and depth of God’s creations. Loving the Lord, loving his wife and raising his children in the Lord were always the steadfast priorities of his life. He was preceded in death by his parents, G.R. and Ruby Tinius, son Mark, grandson, Danny Huggins, Jr., brother, Charles, and sister, Mildred Swahn. He is survived by his wife of 69 years, Peggy; children: Michael and wife Debby; Deatra Keele and husband, Les; Dan Huggins and wife, Kim, and Marla Touchstone and husband, Stephan, 9 grandchildren, 6 great-grandchildren, and many beloved nieces and nephews. Should friends desire, memorials in Bob’s memory can be made to Home Missions at West Freeway Church of Christ at www.wfcoc.org, or Eastern European Missions at www.eem.org The family respectfully requests that all attendees to the visitation and funeral wear masks and practice social distancing.

Robert Hudson Tinius, 91, was born in Oklahoma City to G.R. and Ruby Love Tinius. He grew up in Tulsa, where his father not only ran a leather business, but served several congregations of the Church of Christ as a part-time minister. Bob and... View Obituary & Service Information

The family of Robert Hudson Tinius created this Life Tributes page to make it easy to share your memories.

Send flowers to the Tinius family.