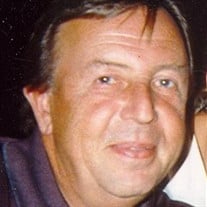 Robert Paul Bernoski passed away unexpectedly Monday, Nov. 7, 2016, in Fort Worth. Celebration of life: 4:30 p.m. Saturday, Jan. 14, 2017, at Colonial Country Club in Fort Worth. All friends and family are welcome. Memorials: In lieu of flowers, the family suggests a donation in his memory to the First Tee of Fort Worth (Life Skills for Children). Bob, as he was known to family and friends, was born April 12, 1944, in Chicago, Ill., to Raymond and Loyola Bernoski. He grew up on the South Side, graduating from Brother Rice High School and attending Loyola University. Married in 1965 to his first wife, Rita Sheffner, he spent his early career advancing in sales until moving to Mansfield in 1977. Once there, he started his own business, Berfam Engineering, named aptly after what he considered his most important asset, his "Bernoski Family." He spent 30 years in the bakery equipment industry as a successful businessman and entrepreneur (traveling the world) and making many friends along the way. Bob married Constance Stevens on Dec. 24, 2005. As a retiree, he volunteered with the American Association of Retired Persons to provide free income tax preparation through the Fort Worth library. Anyone who knew him, knew that Bob was a Chicagoan at heart. As such, he loved da Bears, Italian beef, the arts, and the blues. Passionate about golf, some of Bob's favorite times were on the course playing with friends all across the country. With his quick wit and sharp intellect, he could always be relied upon to find the humor in a situation. Throughout his life he brought tremendous joy and laughter to his family and friends. In addition to his family, one of the things Bob valued most was helping others. As such, he left a strong legacy of "giving back" with his children and grandchildren. Bob will be deeply missed and his absence will be felt for years to come. Bob was preceded in death by his father and mother, Raymond and Loyola Bernoski, and his first wife, Rita Bernoski. Survivors: Together 20 years, Bob is survived by his wife, Constance Stevens; children and their spouses, Lynn and Wes Smith, Beth and Tom Bergeron, Cathy Bernoski and Darrell Stevens, Mike and Amy Bernoski, Laura and David Vaillancourt, Amy Bernoski, Merritt Minnemeyer and Thomas Flynn; loving grandchildren, Conor, Ashlyn, Mallory, Thomas, Simone, Elijah, Nathan, Ella, Wesley, Sydney, James, Abby, Sayvaughn, Jayvaughn, Luke and Lily; brother and sister and their spouses, Tom and Cynthia Bernoski, Mary Ellen and Tom Thurston; and many nieces and nephews.

Robert Paul Bernoski passed away unexpectedly Monday, Nov. 7, 2016, in Fort Worth. Celebration of life: 4:30 p.m. Saturday, Jan. 14, 2017, at Colonial Country Club in Fort Worth. All friends and family are welcome. Memorials: In lieu of flowers,... View Obituary & Service Information

The family of Robert Paul Bernoski created this Life Tributes page to make it easy to share your memories.

Send flowers to the Bernoski family.