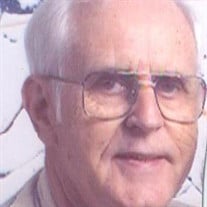 Richard Lovell Blaisdell died at home on November 10, 2015. Born on June 1, 1925, in Brewer, Maine, Dick was a loving husband, father, grandfather, great-grandfather, and friend. He was married to Hazel Carr Blaisdell, the love of his life, for over 60 years. He was preceded in death by Hazel, and his brothers Charlie, Frank, and Gene. Dick was a World War II veteran, having been the Central Fire Control Gunner of a B-29 crew that completed 35 missions over Japan. He was awarded the Distinguished Flying Cross, the Air Medal with three Oak Leaf Clusters, and several other citations. He was a member of the Air Force Acceptance Crew for the B-36 program at Consolidated Vultee from 1948 to 1954. Dick graduated from TCU in 1965 and was employed by Howell Instruments from 1954 to 1989. He was member for many decades of South Hills Christian Church in Ft. Worth where he served as Board Chair, Deacon, and Property Manager, among other roles. He had been a volunteer tutor to elementary school students and coached Little League and Pony League in the 1960s and ‘70s. He enjoyed sports, was a long-time supporter of TCU athletics, and, in his younger days, played ice hockey and was a speed skater. He is survived by his sons Chuck (Barbara), Jim (Linda), and Greg (Melissa), his adoptive son Bob Hill (Priscilla Reckling), his sister Helen Caldwell (Gordon), seven grandchildren and six great-grandchildren. A memorial service will be held at South Hills Christian Church, 3200 Bilglade Road, Ft. Worth, Texas, on Saturday, December 5, 2015, at 10:30 a.m. Memorial gifts may be given to either South Hills Christian Church, Smile Train, P.O. Box 96231, Washington D.C., or First Christian Church, 16 E. Platte Ave., Colorado Springs, Colorado 80903.

Richard Lovell Blaisdell died at home on November 10, 2015. Born on June 1, 1925, in Brewer, Maine, Dick was a loving husband, father, grandfather, great-grandfather, and friend. He was married to Hazel Carr Blaisdell, the love of his life,... View Obituary & Service Information

The family of Mr Richard Blaisdell created this Life Tributes page to make it easy to share your memories.

Send flowers to the Blaisdell family.