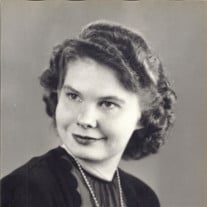 Rhoda Mildred Burgess was born October 8, 1926 in San Antonio, Texas and died April 5, 2018 in Ft. Worth, Texas. Her early years were spent in San Antonio and Tampico, Mexico, and school years in Austin, Texas. She died peacefully of natural causes at the age of 91 at Trinity Terrace Health Center. She is survived by a niece, Sheryl Sebo, and nephews, Gary Bristol and Bryan Bristol, and was preceded in death by her parents, Lorine Kittles Burgess and William Grady Burgess, sister Pamela Bristol, brother-in-law, Rev. Dr. Ray Bristol, and nephew, Mark Bristol. Rhoda earned a Bachelor of Liberal Arts degree with honors in Spanish (1948) from University of Texas at Austin, a Bachelor of Library Science from University of North Carolina at Chapel Hill, and a Master of Library Science from Texas Women’s University (1981). Her profession was as a Reference/Special Collections Librarian. She enjoyed positions in several colleges, including University of Arkansas at Little Rock, for many years at University of Arkansas at Fayetteville, Southern Methodist University, and finally, at University of Texas at Dallas (1978 -1992), from which she retired after a distinguished career. An amazing coincidence is that a University of Arkansas/Fayetteville graduate student she helped while in pursuit of an English degree was Dr. Jim Lee, now retired and leader of the Trinity Terrace Book Club that Rhoda participated in. He is an author and was a distinguished Chair of the English Department at University of North Texas. She was a member of University Christian Church in Ft Worth, AAUW, Texas Retired Teachers Association, UTD Retiree Association, and earlier, League of Women Voters. She actively supported both musical and visual arts wherever she lived most of her life and continued to attend concerts at Bass Hall and exhibits at Kimball and Amon Carter Museums until the past few years. She shared her expertise at University Christian Church (Disciples of Christ) and Trinity Terrace libraries, and served as 14th-floor representative on the Trinity Terrace residence council. Rhoda was proud of her Texas heritage. She loved Mexican culture, tennis, swimming, gardening, travel, study of the Bible, and current affairs. She traveled to a variety of destinations: Great Britain, Scotland, Ireland and Wales, Spain, and Southwestern United States. Rhoda’s family wishes to extend their deep gratitude to staff and caregivers at Trinity Terrace, particularly the 2nd floor health center, Activities, Therapy, and Social Work staff, as well as Pastoral Care ministry at Trinity Terrace and University Christian Church. The family is grateful for her long-time caregiver and friend, Sonia Ramos, who faithfully attended to her needs until the end of Rhoda’s life. Contributions in her memory may be sent to University Christian Church Global Mission or Music Ministry; the School of Information and Library Science Fund #292901 at University of North Carolina/Chapel Hill, UNC Office of University Development [P.O. Box 309; Chapel Hill, NC 27514-0309, noting “Gift in memory of Ms. Rhoda Burgess”]; Trinity Terrace Gifts/Memorials fund (1600 Texas St., Ft. Worth, TX 76102); or to a charity of choice. A memorial service including a music concert will be held Monday, May 7, 2:00 p.m. at Trinity Terrace Auditorium, 1600 Texas St, Ft. Worth, Texas.

Rhoda Mildred Burgess was born October 8, 1926 in San Antonio, Texas and died April 5, 2018 in Ft. Worth, Texas. Her early years were spent in San Antonio and Tampico, Mexico, and school years in Austin, Texas. She died peacefully of natural... View Obituary & Service Information

The family of Rhoda Mildred Burgess created this Life Tributes page to make it easy to share your memories.

Send flowers to the Burgess family.