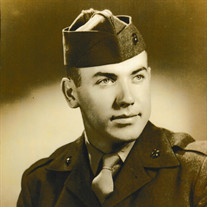 Accompanied by a heavenly host into the arms of his Lord and Savior Jesus Christ, Ray L Newton passed away peacefully March 16, 2022 with his family at his side. He was 91. Ray was born in a farmhouse in Clay County, Illinois on September 27, 1930 to parents James L Newton and Clara (Frazier) Newton. Growing up on a small farm during the Great Depression and WWII required diligence, character and fortitude, traits Ray exhibited throughout life. Ray attended school in Iola, Illinois walking 3 1/2 miles each way. Many days he rode his horse Tony. In his late teens he worked in construction, involved on many projects around Illinois. December 4, 1951 was an important day in Ray’s life as he was inducted into the United States Marine Corps. The Korean War had been going on for 1 1/2 years. After completing boot camp at MCRD, San Diego, Ray was assigned to ANGLICO, 3d Signal Battalion, 3d Marine Division, FMF, Camp Pendleton, California. President Eisenhower ordered the 3d Marine Division to ship out in July 1953. Within hours the truce was signed to end hostilities. His entire life Ray said, “They quit because we were coming.” The lessons learned during his time in the Marines gave Ray a renewed purpose to serve his Lord. The Lord brought Frances Edgington into his life at this time. Their first date was July 4, 1954 and they were married in Danville, Illinois on July 30, 1955. Frances was the love of Ray’s life. Together they attended Northwestern Bible College in Minneapolis. In 1957 Frances graduated and they moved to Pillsbury Bible College in Owatonna, Minnesota where Frances taught and Ray finished his final year. After graduating Ray also taught there. During these years they had three children, Greg, Nancy and Todd. After teaching at Pillsbury a few years and completing seminary Ray was ordained on July 31, 1961 in Danville, Illinois at First Baptist Church. Ray became pastor of the Lowry Avenue Baptist Church in Minneapolis in 1963. The family grew up together in a little red house in Fridley, Minnesota. Ray ministered for Christ to thousands of people in those years. Never resting he would work during the day, have dinner with his family and then go out to visit people in the hospital or their homes. Leaving Minnesota in 1975 did not end Ray’s love for those times. Many lifelong friends have kept in touch with Ray to this year. In 1982 Ray and Frances moved back to the little farmhouse in which he was born. He stayed close to his aging father and pastored a little country church. He drove all over Illinois dealing in antiques. He never knew a stranger and everywhere he went he encouraged and exhorted everyone. Ray moved Frances to Fort Worth in 2007 to be close to their three children. In sickness and health Ray showed his devotion to Frances. He raised his family while taking care of Frances after her stroke in 1971. His love for Frances was never more evident than when, for three years, every night he slept on a mattress on the floor next to her hospital bed until she passed in 2019. Among those rejoicing in heaven for their reunion with Ray are his wife Frances (Edgington) Newton, his parents James L and Clara (Frazier) Newton, his in-laws Andrew Jackson (AJ) and Helen (Pollitt) Edgington, his son Greg, his sister Erma and her husband Marion Britton, and his brother-in-law Gordon Edgington. Those of us left behind and mourning Ray’s passing include his daughter Nancy and Kerry Peavey of Garland, Texas, his son Todd and Linda (Bishop) of Rockwall, Texas, his daughter-in-law Elaine (Sanders) of Fort Worth, his granddaughter Renee (Peavey) and Branden Henry and their children Lily, Jack, Ella and Luke of Madison, Mississippi, his granddaughter Tricia (Peavey) and Andy Harris and their children Trevor, Abby, Scarlett, Penny, Bryson and Ruby of Mesquite, Texas, his grandson Andrew James (AJ) and Kendra (Roberts) Peavey and their son Truman of Garland, Texas, his granddaughter Amy (Peavey) and Matthew Chappell and their son Silas of Florence, South Carolina, his sister-in-law Maxine (Schofield) Edgington of Danville, Illinois, many nieces and nephews and everyone who knew him. Romans 4:4-5 Now to him that worketh is the reward not reckoned of grace, but of debt. But to him that worketh not, but believeth on Him that justifieth the ungodly, his faith is counted for righteousness. Ray had a dream a couple weeks ago. In the dream he was standing in a line waiting at the gate of heaven. When it was his turn the person at the gate said, “Go on in, your debt has been paid.” The family will receive guests on Friday, March 25, 2022 at 10:00 AM with the funeral service to follow at 11:00 AM at Guardian Funeral Home, 5704 James Avenue, Fort Worth, Texas. Interment will be at Dallas Fort Worth National Cemetery April 11, 2022 at 10:00 AM.

Accompanied by a heavenly host into the arms of his Lord and Savior Jesus Christ, Ray L Newton passed away peacefully March 16, 2022 with his family at his side. He was 91. Ray was born in a farmhouse in Clay County, Illinois on September 27,... View Obituary & Service Information

The family of Mr. Ray L. Newton created this Life Tributes page to make it easy to share your memories.

Accompanied by a heavenly host into the arms of his Lord and...

Send flowers to the Newton family.