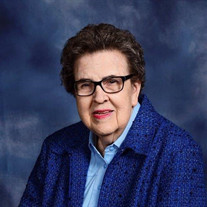 Peggy Lou Turner, 88, died March 28, 2019. Memorial Service: Saturday, April 6, 2:00 p.m. at Trinity Terrace, 1600 Texas Street, Fort Worth. In lieu of flowers, memorial gifts may be made to Polytechnic United Methodist Church or to The Trinity Terrace Foundation. Peggy was born February 24, 1931 in Abilene, Texas to William Henry and Willie Elizabeth Turner. She grew up in DeLeon, Texas, graduating from DeLeon High School in1948. She received a BA degree from Texas Wesleyan in 1951. Continuing her education she earned a Master of Arts in Library Science from Texas Women's University and a Masters in English from the University of North Texas. She received certification in Language Learning Disabilities from East Texas State. Her career included teaching in the public schools and serving as a public school librarian. After retirement from FWISD, Peggy worked at Connections Bookstore and became the owner of the store in 2000. Peggy's interests were many. She loved books and literature. Peggy enjoyed game nights and travel with friends. Whether it was to Granbury or Red River, Colorado or New England, or to London, England or Paris, France or Guatemala, Peggy was ready to explore. Loving to be near nature, she bought land near Stephenville, declared it a mountain and built a yurt on the top. Peggy's Mountain became a gathering place for friends and relatives to enjoy the out of doors with the trees, flowers, rocks, squirrels, ladybugs and butterflies. Over the years Peggy held membership in Altrusa, Delta Kappa Gamma, various teacher and librarian associations, and Polytechnic United Methodist Church. Peggy was preceded in death by her parents, William Henry and Willie Elizabeth and by her brothers and sisters: Lorene Bond, Selman Turner, Hazel Craig and Bruce Turner. She is survived by several nieces, nephews, and cousins and by many friends.

The family of Peggy Lou Turner created this Life Tributes page to make it easy to share your memories.

Send flowers to the Turner family.