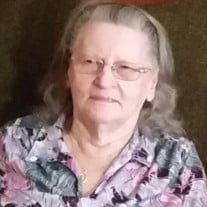 Marilyn Fae (Bailey) Jackson, age 93, passed away January 9, 2021, at the Estates Health Care and Rehabilitation Center in Fort Worth, Texas. She and her husband, Howard Jackson, moved from their longtime residence in Enid, Oklahoma to Burleson, Texas in 2007 to be closer to three of their daughters. Marilyn was born in Asher, Oklahoma on April 6, 1927, the second child of Ennis Miller and Lou Evalyn (Conn) Bailey. She attended Asher schools where she was a member of the basketball team. She met her future husband, Howard E. Jackson, when she brought her father his lunch at the drilling site near Asher. They were married on April 3, 1948, in Walters, Oklahoma and enjoyed 72 years of marriage together. Marilyn was a full-time homemaker while Howard spent his career in the Oklahoma oilfields. Due to the nature of Howard’s job, the family lived in Walters, Frederick, Medford, and Buffalo, Oklahoma before settling in Enid in 1960. Once their daughters began school, they bought a house in Enid where they stayed for the next 50 years. While their daughters attended school, she took a job as a school lunch lady. Marilyn was the caretaker for both her and her husband’s families, and their home was the center of many family functions. Over the years, their parents, as well as their aunts, uncles, siblings, nieces, nephews, and other extended family members often lived a few months in the Jackson household. As soon as one relative left, it seemed the next one was ready to move in. Marilyn loved to crochet and play the piano. She was known for her canned fruits and vegetables that were grown in her husband’s gardens. Howard and Marilyn were a great team; whatever he could grow, she would can, and, whenever there was excess, they would give produce to their extended family and neighbors. Marilyn is survived by her husband, Howard E. Jackson, her brother, Donald E. Bailey, daughters Ina L. Melvin, Marla R. Hackett, Rita A. Jackson and husband Kenneth Jackson, and Teresa K. Alcorn. She had eight grandchildren - Andrea D. Melvin; Anica M. (Melvin) Wilson and husband Bryan; Anissa R. (Melvin) Hall and husband Daniel; Anya C. (Melvin) Harness and husband Chad; Kyle G. Hackett, Jeremy D. Hackett, Ian C. Hackett, and Grant C. Alcorn and wife Janet. Marilyn had nine great grandchildren - Raina D. Melvin, Gage K. Wilson, Kira R. Hall, Ethan B. Hall, Collin D. Harness, Makenna F. Harness, Hunter W. Harness, Chase O. Harness and Avah M. Alcorn; and a step great-granddaughter, Emma Hays, and many loving nieces, nephews, and cousins who regularly visited her no matter where she lived. Marilyn was preceded in death by her parents and brothers - infant, Ennis Duane Bailey, Loyd Delane Bailey, and Robert Nathaniel Bailey; sisters - Patricia Nell (Bailey) Gurney, and Catherine Ella (Bailey) Zeelenberg; and sons-in-law Dallas R. Melvin, Sr. and Larry D. Hackett. Per her wishes, Marilyn was cremated. Her remains will be buried at the Walters Cemetery in Walters, Oklahoma. A memorial service will be scheduled for a later date when it is safe from the COVID-19 pandemic for the family to gather. In lieu of flowers, the family requests donations to either the American Red Cross (https://www.redcross.org/donate/donation.html/) to honor Howard and Marilyn’s commitment to blood donation or to the National Organization for Albinism & Hyperpigmentation (NOAH - https://www.albinism.org/one-time-donation) to honor the genetic condition that runs in our family.

Marilyn Fae (Bailey) Jackson, age 93, passed away January 9, 2021, at the Estates Health Care and Rehabilitation Center in Fort Worth, Texas. She and her husband, Howard Jackson, moved from their longtime residence in Enid, Oklahoma to Burleson,... View Obituary & Service Information

The family of Marilyn Fae (Bailey) Jackson created this Life Tributes page to make it easy to share your memories.