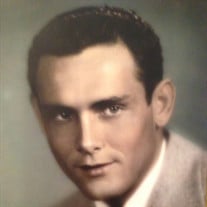 Lonnie Kent Stoker, 89, passed away Wednesday, January 3, 2018 in Arlington, Texas. Born on March 20, 1928, and raised in Haskell, Texas, he was the son of Willie Preston Stoker and Katherine Virginia Crandall. He graduated from Trent High School in 1946. After three years in the Air Force, Stoker went to college on the G.I. Bill, attending Hardin Simmons, Decatur Baptist College, and graduated with a B.A. from Texas Wesleyan College in 1952. He met his future wife, Mixie Taylor, while attending Decatur Baptist in 1949. Stoker often said that he first saw her across a crowded gymnasium floor and knew she was the one. Stoker and Mixie were married in Archer, Texas, in 1956, after dating each other for seven years. (Mixie took some convincing.) Stoker began working for General Motors in Arlington in 1953 and worked there for over thirty years. He loved sports and played high school basketball, college football, and semi-pro baseball. After college, his passion became playing tennis. He passed on that love of sports to his children and coached peewee basketball and football in Arlington for several years in the 1970s. Stoker was one of the six founding coaches of the first girls softball league in Arlington in 1970. He was never too busy to go outside and play ball with his kids. Stoker was most proud of his WWII service in the 509th Bomb Wing in the 8th Air Force from 1946-49. He was stationed at Walker AFB in Roswell and his favorite memory there was seeing Doris Day in concert. Stoker’s favorite singer was Nat King Cole but his family never knew what kind of music he would be listening to next – it could have been Evita, Chariots of Fire or even the panpipe music of Zamfir for one year there in the 1990s. He was a diehard Rangers fan and he and Mixie spent many nights cheering on the team. The family was lucky not to have lost him in 2011 when Nellie Cruz misplayed the fly ball in the World Series. Stoker was also a lifelong Democrat who admittedly made an egregious error when he took his family to a Richard Nixon rally in 1968. Stoker is survived by the love of his life for more than sixty seven years, Mixie; son Eric and his wife, Lisa; two daughters Tana Stoker and Marla Bashir; grandchildren Ryan Barnard-Stoker and his wife, Heidy Colón-Lugo; Winston and Clayton Stoker; great grandchild Alba Barnard-Colón; extended family Kathy Pendergrass, Kamran Bashir, Jared Hoover, and Betty Crymes . He is also survived by three sisters, Janice Ligon, Claudia Cory, and Jane Stoker. He was pre-deceased by his younger brothers, John, Dan, and Paul Stoker. Other survivors include many loved nieces, nephews, and cousins. The family would like to thank the nurses, aides, and therapists at Interlochen Health and Rehab Center for their devoted care during his last four months. The only fault that Stoker found with Interlochen was that he had to make do with CNN instead of MSNBC for his news. There will be a private family service at the DFW National Cemetery for veterans in Dallas, Texas. In lieu of flowers, please write a stinging letter to your congressman. It’s what he would have wanted. There is an online memory sharing area for Stoker at guardiancremation.com.

Lonnie Kent Stoker, 89, passed away Wednesday, January 3, 2018 in Arlington, Texas. Born on March 20, 1928, and raised in Haskell, Texas, he was the son of Willie Preston Stoker and Katherine Virginia Crandall. He graduated from Trent High... View Obituary & Service Information

The family of Lonnie Kent Stoker created this Life Tributes page to make it easy to share your memories.

Send flowers to the Stoker family.