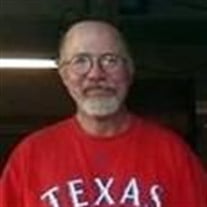 Larry Zucker, 64, of Fort Worth, Texas passed away peacefully on Saturday, January 26, 2019. Graveside service will be held at Laurel Land Memorial Park, 7100 Crowley Road, Fort Worth, Texas, 76134 at 2:00 pm on Friday, February 15, 2019. Larry Eugene Zucker was born on January 18, 1955 in Fort Worth, Texas to Bruce and Laura Zucker. He was the younger of their two children having an older sister, Carolyn. Larry graduated from O D Wyatt high school. Larry would work as a young boy in the family feed business known as Zucker Feed and Grain. After graduating from high school, Larry started working full time at the store and would make a career of working in the feed business through changes in ownership; the last years spent with Russell Feed and Supply. Larry was a hard worker that never missed work and made “doing his very best” his motto. Larry was an extremely passionate sports fan. Although he did not participate in sports after his youth years, he did not lose his love for sports. It made no difference if it was baseball, football, bull riding, golf, or any other sport, he followed every sport closely, watching sports on television as often as he could and reading the sports section of the newspaper on a daily basis. He had a wonderful collection of tee shirts, jerseys and caps representing a large number of teams and people. Larry was also very active in his church from a very early age. He was an avid Bible reader and had a nice collection of Bibles as well. His faith gave him the assurance he needed to allow him to pass away peacefully. Larry was preceded in death by both his parents. Those left to cherish his memory and continue his legacy are his sister, Carolyn West (Billy), niece Kristy Burr (Joe), niece Lisa Bachhofer (Chuck), nephew William Eugene West, niece Laurie Lorraine Olezaba (Armando), nephew Bruce George West, many loving family members, co-workers, and friends.

The family of Larry Zucker created this Life Tributes page to make it easy to share your memories.

Larry Zucker, 64, of Fort Worth, Texas passed away peacefully...

Send flowers to the Zucker family.