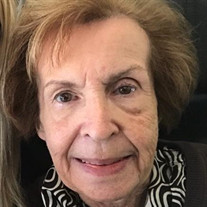 Karen Elsie Skaggs, a 40-year resident of Fort Worth, passed away on Thursday, Oct 3, 2019, in her home, after a long and valiant 8-year battle with cancer. She was 79. Born Karen Elsie Giles on March 17, 1940 to Malcolm Sr. and Elsie Giles, she moved with her family to Sacramento, California in the early 1950’s, where she eventually met and married high school sweetheart Eddy Skaggs, on January 1, 1956. Their union spanned 37 years, produced five children, seven grandchildren and included travels throughout the United States and Europe during Eddy’s 21-year military career. After raising her children, she worked outside the home in two separate fields: child care, and records research. Karen developed several interests during her lifetime. She was an avid reader, with a voracious love of psychology books, gravitating toward subjects such as women’s empowerment and self-reflection. Her taste in music often reflected those values, but sometimes also included light and silly selections that matched her sense of humor. She loved Elton John, Abba, Roy Orbison, Carly Simon, Tony Orlando and Engelbert Humperdink. She also took pride in engaging her own mind, displaying skillful prowess with crossword puzzles, card games, word jumbles and brain teasers. At home, she was known for her outstanding cooking skills, signature holiday dishes and lavish food layouts. Most years, she invested an 8-hour day in early December, producing enough sugar cookies to last throughout the entire Christmas holiday season. Her generosity extended beyond her family. She provided continuous financial support for several worthy causes, including The March of Dimes, The American Cancer Society, and Smile Train, among others. Her personal favorite: She sponsored a series of World Vision children over the course of 30 years, and proudly displayed their pictures in her residence. She was quick to avoid conflict and easy to forgive others for their faults and transgressions. But she was also principled in her values, and stood her ground when the conflict struck a deep and personal chord. Karen highly valued the right to privacy. She fiercely protected that privacy, and went out of her way to respect the space and privacy of others. After Eddy’s death in 1992, she insisted she maintain her independence - living in her own home, on her own terms, during her final 27 years. In her final few weeks, she remained at home – with family – but steadfastly commanded as much space, privacy, and autonomy as she could still personally and physically muster. She is preceded in death by Parents Malcolm Sr. and Elsie Giles, Husband Eddy Skaggs, Mother-in-Law Inez Hilton (Jim Skaggs, Leo Hilton), Stepfather James Cristoni, Brother-in-Law Bob Padgett (Dorothy Padgett) Daughter-in-Law Rhonda Skaggs, and Grandson Jason Lessire. She is remembered with love by Brother Malcolm Giles Jr. (Mona Giles). Sons Randy Skaggs, Doug Skaggs (Donna Smith), Mike Skaggs (Beth Skaggs) and Tim Skaggs (Brenda Skaggs). Daughter Shannon Kaiser. Onetime Daughter-in-Law Noni Skaggs. Grandchildren Stacie Whitman (Mike Whitman), Robert Skaggs, Ryan Skaggs, Keneddy Kaiser, Kambell Kaiser, James Skaggs. Great-granddaughter Nia Skaggs. Sister-in-law Alice Shaw. Nieces Reina Shaw, Garee Lynn Hall (Mike Hall), Buffy Seyfried (Raymond Seyfried). Graveside service will be held at Laurel Land Cemetery 7100 Crowley Road Fort Worth, Texas 76134 on October 12, 2019 at 10:00 a.m. Visitation and viewing are from 9:00-10:00 a.m. at Laurel

Karen Elsie Skaggs, a 40-year resident of Fort Worth, passed away on Thursday, Oct 3, 2019, in her home, after a long and valiant 8-year battle with cancer. She was 79. Born Karen Elsie Giles on March 17, 1940 to Malcolm Sr. and Elsie Giles,... View Obituary & Service Information

The family of Karen Elsie Skaggs created this Life Tributes page to make it easy to share your memories.

Karen Elsie Skaggs, a 40-year resident of Fort Worth, passed...

Send flowers to the Skaggs family.