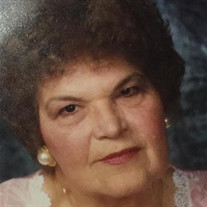 Judy Marie Veiga, 85, of Fort Worth, Texas went to be with the lord on Wednesday, June 7, 2017 surrounded by family and friends. Those that knew her, called her Marie. Marie was born in Kopperl, Texas on June 15, 1931 to Velma Harkcom and Louis Harris. She was raised in Fort Worth, Texas, but moved to Inglewood, California in 1968 where she married the love of her life, Joseph "Pepe" Veiga. They remained in Inglewood until 1985, when they returned to Fort Worth to retire and become business owners. Marie has four sisters and two brothers. She has seven children, countless grand children, great grand children, and great-great grand children. Marie was a daughter, sister, mother, grand mother, great grand mother, great-great grand mother, cousin, and more to many, but to most she was someone who was a friend for life. She had a great big heart, loved with it out on her sleeve, enjoyed life and people, talking politics, religion, and anything else that she had an opinion on. She was preceded in death by her parents, her sister's Ruby Vincent, Mary Jane Bailey, and Maxine Farmer, her brother Alton Maurice "Cowboy" Harris, her son Larry Randall Dodson, and her granddaughter Wanda McCoy. She is survived by her sister Tommie Roberts of Haltom City, Texas and her brother James Hunt of Haltom City, Texas; her daughters Linda Graves of Fort Worth, Texas; Nancy Mayhew of Fort Worth, Texas; Denise Bohling of Fort Worth, Texas; her son's Edward Glen Dodson of Joshua, Texas; Robert Lee Dodson of Oklahoma; and Joseph Anthony Veiga Jr. of Fort Worth, Texas. Viewing for Marie will be at the Guardian Funeral Home of Fort Worth on Wednesday, June 14, 2017 from 6 to 8 PM. Her funeral will be at Laurel Land Memorial Park in Fort Worth on Thursday, June 15, 2017 at 3:00 PM.There will be a celebration of her life on Sunday, June 25, 2017 hosted by her family. Marie will be missed dearly. Flowers may be sent to the Laurel Land Memorial Park or donations may be made in her name to the St. Judes Childrens Hospital.

Judy Marie Veiga, 85, of Fort Worth, Texas went to be with the lord on Wednesday, June 7, 2017 surrounded by family and friends. Those that knew her, called her Marie. Marie was born in Kopperl, Texas on June 15, 1931 to Velma Harkcom and... View Obituary & Service Information

The family of Judy Marie Veiga created this Life Tributes page to make it easy to share your memories.

Send flowers to the Veiga family.