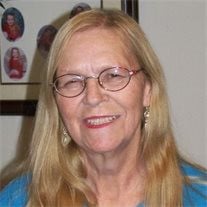 CROWLEY -- Joy Prater Engstrom, a loving and courageous woman, lost her fight for life Wednesday, Dec. 3, 2008, and now resides with her Lord and Savior, Jesus Christ. Funeral: 10 a.m. Saturday at Guardian Funeral Home. Prior to her death, she expressed the wish for her friend, Susan Brown, to spread her ashes over a special place in Colorado. Visitation: 6 to 8 p.m. Friday at the funeral home. She was born and raised in Fort Worth, and and as an adult lived for years in nearby Everman and most recently in Crowley. Growing up, she acquired a love for music from her beloved grandmother, Meemo, and played the piano, organ, guitar and any other musical instrument she picked up. Joy was a spirited woman, a "rounder" at times, but she also had a sensitive, soft side. At one time, her love for animals led her to work as a veterinary technician. She never met a stranger, and had many close friends. Several years after a liver transplant, she braced for the heart surgery she required to be considered for a needed kidney transplant. Following her heart surgery Tuesday, valiant efforts by the cardiovascular ICU team and her physicians failed to revive her. She will be sorely missed by her siblings, nephews, nieces, other relatives and special friends. She was preceded in death by her parents, June and Robert J. Prater; nephew, Matthew Rogers; and beloved grandmother, Jacqueline Zigler. Survivors: Her sister, Jan Prater; brothers, Steve Prater and wife, Scarlett, and Tony Prater and wife, Susan; stepbrother, Don Prater and wife, Marilyn; and stepsister, Lissa Prater; nieces and nephews, Thomas Pitts, Theresa McCarthy, Alexandria Prater, Austin Prater, Barrett Prater, James Robert Prater, Rusty Prater, Justin Prater, Tony Prater Jr., Damien Phelps, Kasi and Jackey; granddaughter, Isabella Engstrom; grandnieces, Jillian Pitts and Aoife McCarthy; and many special friends.

The family of Ms. Joy Janelle Engstrom created this Life Tributes page to make it easy to share your memories.

Send flowers to the Engstrom family.