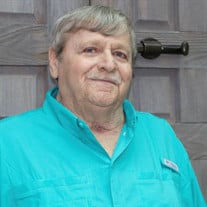 Joseph Sheldon May Jr, 64, of Fort Worth, TX, succumbed to his 3 year battle against Lung Cancer on June 04, 2021, with family at his side. He was gifted to us on October 28, 1956 in Fort Worth, TX through his parents Joseph Sheldon May of Acton, TX and Donnie Bell Roberson of Lipan, TX. The family has entrusted Guardian Funeral Home with the arrangements. Visitation will be held at six o’clock in the evening of Wednesday, June 9, 2021. Funeral services at two o’clock on Thursday, June 10, 2021. Address: 5704 James Ave, Fort Worth, TX 76134. A reception will follow at his home. Jim Ater will officiate the ceremony. “It’s concrete, not cement,” Joe would insist, explaining that cement is just one ingredient that makes up concrete. Similarly, his legacy teaches us that life comprised of a multitude of ingredients becomes more sustainable and durable than each standing alone. Joey grew up in Troy and Fort Worth, TX with six siblings, 5 sisters and 1 brother. Being the second to youngest, they rarely spent much time inside, his mom was a housewife who would do crafts, crochet, quilt, make dolls to sell at local craft shows. His father was a subcontractor foreman for highway construction and traveled a lot. In January 1982, Joey walked into a local pub where he met his best friend and love of his life, Teresa Gay Wingo. They were united in marriage on August 24, 1986 in Joshua, TX. Together they raised 3 children: Bruce Hayward Sapp Jr, Jonathan Monroe Sapp and Tina Marie Sapp. Joey was a great provider and eager to teach the kids life skills. Affectionately known as Papaw to his grandchildren, he was a mentor and inspiration to them. He helped them to enjoy MotorSports and taught them that personal feats build character. His work ethic was admirable and second to none. Joey attended Paschal High School, and obtained his GED in 1977. He went on to study Masonry at Bricklayers Local #6 Masonry School, then at age 40 he began his 5 year studies to obtain his HVAC Technicians License from Tarrant County College. He began working as a bricklayer, at the young age of 15, for Gorman Masonry. After achieving master mason he went to work with his father and brother, Don May at Dahlstrom Corp, in Highway Construction. The roads they built, were sometimes temporary and provided an alternate route while the main highways were being built. He viewed it as paving a new path for travelers to reach their destination. He incorporated that same logic in his everyday life and used considerable ingenuity (and Southern engineering) to pave a new path, if the one he was on needed a detour. He began work for Barney Roark in 1991 remodeling rental property, then after he obtained his HVAC technicians license he helped in the Roark’s AC/Heating business until 2011. Sundance Square Engineering has been his career family since 2012, although retired in December 2019, they still considered him part of the crew. His impact in the organization was inspiring. Even through his medical ailments, he would run circles around the younger engineers. He kept them on their toes, but all in good humor and with a cheerful heart. During his career at Sundance Square he was able to take real vacations, and enjoy time with his wife and family. The work family supported him through his wife’s battle with breast cancer, later her passing and then his own battle with Lung Cancer. They were a vital part of his life. He enjoyed Family gatherings, watching Cowboys play and the car races, most outdoor activities including camping, fishing, gardening. He taught himself to play the guitar at an early age and would play while his wife and others gathered around to sing. His step-children were blessed with a treehouse he designed and built himself. Building was a passion for him, from a miniature farmhouse made out of popsicle sticks to, brick structures, chicken/animal coops, highways and buildings. He did his best to keep everyone in good spirits with smart, witty jokes and comments that would leave the recipient thinking about it into the far distant future with reoccurring laughter. In March 2021, Joseph was honored with a 20 year sobriety Chip from Alcoholics Anonymous. Joey is survived by 4 stepchildren: Bruce Sapp Jr, Jonathan Sapp (Laurie), Tina Sapp, Chris Garrett (Amanda); 4 siblings: sisters Linda Colbert, Kay Kidwell (Cliff Shirley), Pam Stewart (Ben Colbert) and brother Don May (Brenda); 8 grandchildren: granddaughters Tori Sapp, Katie and Ameri Shaye Garrett, grandsons Kye and Kaleb Sapp, Klevor Simpson, Bryson Smith, Jonathan Sapp Jr., great granddaughter Piper Warwick, Uncle Ancil Roberson, Aunt Helen Eller, multiple, cousins, nieces/nephews, great nieces/nephews and extended family. He was preceded in death by his wife of 31 years, Teresa Wingo May, parents, Joe and Donnie May, sisters, Nancy Welch and Sue Hoffman, grandparents, JT and Winnie May and Ethel “Oochie” Roberson.

The family of Joseph Sheldon May Jr created this Life Tributes page to make it easy to share your memories.

Send flowers to the May family.