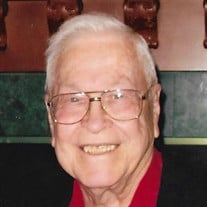 John Frank Bigony, age 92, of Arlington, Texas passed away the evening of Wednesday, December 8, 2021. He was born in Pecan Gap, Texas to Douglas and Mattie Bigony on February 9, 1929. As a child, John Frank lived and was educated in Klondike, Texas prior to attending East Texas State Teacher’s College in Commerce, Texas. John Frank graduated from ETSTC in 1951 with undergraduate degrees in Chemistry, Mathematics and Education and Master Degrees in Education and Mathematics. After college, John Frank taught junior high level Mathematics and Science in Powderly, Texas. Leaving the teaching world behind, he began his career in research and development at Phillips Petroleum as a project engineer and chemist in Borger, Texas. During this period of time, John Frank also served 2 years in the National Guard of Texas. He received an Honorable Discharge in 1953 with the rank of Sergeant First Class in Company B 147th Armed Infantry Battalion. Phillips Petroleum provided an opportunity to move to McGregor, Texas in 1956 with North American Aviation, Inc. in the Rocketdyne Solid Rocket Division as a Chemist in the Propellant Research and Development Section. At Rocketdyne, he served as Engineer-in-Charge of Propellant Applications group and directed the development of new propellant formulations and guided them to successful application in the production of solid rocket motors. While in McGregor, John Frank met and married the love of his life Delores Faye Goff on March 15, 1958 in McGregor, Texas at First United Methodist Church. They were blessed with two daughters Laura Cecile and Joan Elaine. John Frank’s career would continue to take him on an exciting path in research and development by working with LTV/Vought Corporation (Grand Prairie, Texas) and Reed Tool Company (Houston, Texas). He is preceded in death by his wife of 62 years Delores Faye Goff Bigony as well as his parents Douglas Bigony and Mattie Koonce Bigony. John Frank is survived by daughter Cecile and husband James Allen of Dallas, daughter Joan and husband Mike McDonald of Arlington,grandchildren Elise Allen of Dallas, Andrew and Patrick McDonald of Arlington, half-sister Juanita Smith of Temple, Texas and many nieces, nephews and cousins. Family was very important to him and he loved to spend time with family by being an energetic organizer of annual family reunions. A joint Celebration of Life will be held in March 2022 for both John Frank Bigony and his late wife Delores Goff Bigony.

John Frank Bigony, age 92, of Arlington, Texas passed away the evening of Wednesday, December 8, 2021. He was born in Pecan Gap, Texas to Douglas and Mattie Bigony on February 9, 1929. As a child, John Frank lived and was educated in Klondike,... View Obituary & Service Information

The family of Mr. John Frank Bigony created this Life Tributes page to make it easy to share your memories.

John Frank Bigony, age 92, of Arlington, Texas passed away the...

Send flowers to the Bigony family.