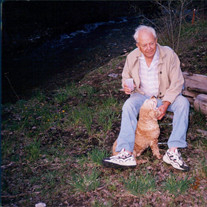 Jess Maury Johnston Jr. was born to Hallie Rominger Johnston and Jess M. Johnston, Sr. on 9/4/1931. He was the youngest of three children. Preceded in death were two older sisters Beverly Johnston Miller and Shirley Johnston Cyrus. Jess married his high school sweetheart, Jeanice Eloise Davis, on February 12, 1951. They were married 68 years. They had 5 children. Margaret Johnston Cohenour (Chris), Katherine Johnston Hagood (Kent), Charlotte Johnston Niedermayer (Kurt), Elizabeth Johnston Doran (George), Jess M. Johnston III (Jamie). Grandchildren and great-grandchildren: Kristen Summar Valdez, Andres Jr., Andrianna, Abigail Jeanice; Lindsay Jimenez, Shaylin and Dominic; Kristen Rapinchuk, (Kyle), Karis, Ana, Aviel; Erin Hagood (Chris), Lauren Hagood (TJ), Eloise and Clyde; David Hagood. Sarah Irwin (Max), Maury Potts (Taylor), Elijah, Samuel, Judah; Mallary Swick (Josh), Milo; Rachel Eastman (Billy), Atticus and Violet; Nathan, Christy and Luke Doran; Jess Johnston IV, Jaxson and Elyse; Austin Johnston, Ryan Turner (Nicole), Kason; Joannie Turner. Jess had numerous nieces and nephews whom he loved dearly. He was “Uncle Bubba” to many! Jess had lifelong friends he treasured as well. Jess was raised in Fort Worth. He attended Alice Carlson Elementary, McLean Jr. High and graduated from Paschal High School in 1949. He graduated from Texas Christian University in the School of Business. Jess served in the Armed Forces. Jess had a full career. He operated a temporary help service beginning in 1959. He managed a national franchise for 19 years before opening his own service. Jess (Johnston Employment Staffing Service) Temporaries was started in 1977. His tenure in this business was the longest of anyone in the metroplex at that time. Jess served two terms on the Fort Worth City Council from 1969-1973. The first term was highly contentious, and people thought he would be “clobbered,” but he prevailed; he ran unopposed for a second term. He has been credited with leading the following movements while in office: *Prevention of the city closing out all Lake Worth leaseholders; *the closing of the Riverside disposal plant; *the promotion to improve Vickery St., including engineering and right-of-way-for the Vickery-Rosedale bridge. (During this time, he was berated by a former city manager for pushing “the worst waste of money and concrete ever perpetrated on the taxpayers of Fort Worth;”} *Efforts in Austin and locally to defeat a bill for the unionization of the police and fire department. Johnston’s knowledge of and dedication to the City of Fort Worth served him well, bringing a flow of qualified applicants to his door as well as customers who remember his enlightened involvement in community affairs. When Jess wrapped up his second term, he provided a news release where he stated, “ accept graciously those compliments bestowed upon you by reason of your office, but never forget that you hold that office as a trust bestowed upon you by the people of Fort Worth, with whom your only true responsibility rests.” Dad loved his second home in Rock Harbor, Granbury, Texas and built an A-frame before the water was released into the lake. He also loved his mountain cabins in Bitter Creek and Cabresto Canyon near Red River, New Mexico. He loved going to the mountains both summer and winter. He loved his family and his dogs, Trooper and Lucky Boy. He had lifelong, very special friends. He belonged to Colonial Country Club for several years and continued selling golf passes many years after letting the membership go. Dad loved big band music, puttering in his yard and workshop and “dumpster diving” – one of his favorite hobbies. So many stories about that!! He never passed up a “bargain.” He lived a full life – a life well lived. His family has devoted the last 5 years to helping their dad remain home while fighting the effects of vascular dementia. Their mission was accomplished when he passed peacefully at home this past Wednesday with his wife and 4 daughters by his side. His son was on the road from Wyoming and spoke to him by phone. We are forever grateful for the many caretakers who cared and loved Dad and Mom over these many years. They are now a part of our family. We specifically want to thank the following – Chris Crist, Roxanne, Sherry Burrows, Kat Hambright, Cathy Duffy, Kristen “Summar” Valdez, Melissa Waters and Karen Jones. We also want to mention Andres Valdez who was always willing to run across the street and help when Dad would fall - on a moment’s notice. We love you all so much!!! We wish to thank Universal Hospice, especially Tony and Paulette, and the other nurses who participated in our dad’s care. They were each one so special and attentive. We appreciate the love and care they provided to him and the support for our family. We will celebrate dad’s life Wednesday, 3 pm, August 7th, at Guardian Funeral Home, 5704 James Ave., Fort Worth, Texas 76134 with a reception following at his home. In lieu of flowers, you can donate to the Alzheimer’s Association or charity of your choice.

The family of Jess Maury Johnston Jr. created this Life Tributes page to make it easy to share your memories.

Send flowers to the Johnston family.