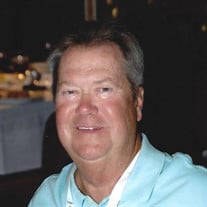 Jerry Andy Whitney, Beloved Husband, Father, Grandfather, and Brother passed away at the age of 62 years, On Monday, March 4, 2019. Jerry’s passing was at Baylor Medical Hospital in Fort Worth. His wife, sister, sons, relatives, and friends will remember the kindness, care and devotion that he had for them. He was preceded in death by his parents, Jerry H. Whitney and Pearly Mae Whitney, one older brother Marvin H. Whitney. He leaves behind his wife, best friend and love, Becky Whitney, their three sons, John Brashear, Wayne Whitney, his wife Tanya, Christopher Dibala his wife Michelle. A sister, Lillie Whitney Perry, her husband Mike, a nephew Matthew. One Aunt Betty Summerlin and One Uncle Roy and wife Pat Summerlin of Webber Falls, Oklahoma. He will be remembered fondly by his (3) Grandsons and their families, Blaine Baxter, his wife Cindy, (2) sons Emory and Norman. James Johnson, his wife Andrea, (2)children Lucas and Nataleigh and Jonathan Brashear, as well as his (3) Granddaughters, Sabrina, Starr and Mya. He rarely met a stranger and loved to spend time with friends and family whenever he had the opportunity to fire up one of several grills in his backyard. The occasion was whenever it meant time spent in the company of others sharing good foods and laughter. He loved spending evenings with friends and family especially at New Years and on the Fourth of July, when the little boy would come out of him and he could spend hours lighting the sky with fireworks. He will be greatly missed by all of his family and friends.

Jerry Andy Whitney, Beloved Husband, Father, Grandfather, and Brother passed away at the age of 62 years, On Monday, March 4, 2019. Jerry&#8217;s passing was at Baylor Medical Hospital in Fort Worth. His wife, sister, sons, relatives, and... View Obituary & Service Information

The family of Jerry Andy Whitney created this Life Tributes page to make it easy to share your memories.

Send flowers to the Whitney family.