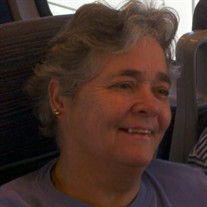 CLEBURNE - Jane E. Craghead died Friday, January 13, 2017. SERVICE: At Jane’s request, there will be no funeral or formal memorial service. Jane was born on August 25, 1944 to John and Helen Craghead in Guatemala City, Guatemala where Jane’s father was a meteorologist employed by Pan American Airways. The family returned to the United States and settled in Cleburne, Texas in 1945. Prior to college, Jane was the first female to take shop and metal classes in Cleburne, and she excelled in music (voice, guitar), art, mechanical and free form drawing, building, and crafts. She also worked several years as a Camp Fire counselor, teaching horseback riding, crafts, and outdoor skills. After graduating with a master’s degree from North Texas State University (University of North Texas), Jane moved to Albuquerque, New Mexico where she became the first woman to teach industrial arts in the Albuquerque high schools. Upon leaving New Mexico, she moved to Mississippi where she worked with veterans at the Gulfport Veterans Administration Medical Center. She then moved to Fort Worth where she attended Texas Christian University and received her certificate to teach severe and profoundly disabled children. She taught at Paschal High School, Bluebonnet Elementary, then Norwood Elementary in Burleson until her retirement in 1998. In retirement, Jane enjoyed gardening, working with her hands, music, fishing, reading, and loving on her pets. She was reserved in demeanor, generous with her time and talents, rich with good humor, a champion of the underdog, a giver of good counsel, and a rock-solid friend. If people wish, they may celebrate her life by going fishing with a friend, reading a good book, planting flowers, adopting a pet, hugging a child, or enjoying a cold brew. We would like to give special thanks to Community Hospice in Burleson for the excellent care they provided during Jane’s illness. Survivors: Mary Ann McKenzie; sister, Gail Jackson (Bill); brother, John (Bud) Craghead (Wyoma); several nieces, nephews, grand nieces, and grand nephews; many wonderful friends; her 'adopted cousins – Jean Walker and Jane Hardwick; and her cat, Sassy, and dogs, Savannah and Boudreaux.

CLEBURNE - Jane E. Craghead died Friday, January 13, 2017. SERVICE: At Jane&#8217;s request, there will be no funeral or formal memorial service. Jane was born on August 25, 1944 to John and Helen Craghead in Guatemala City, Guatemala where... View Obituary & Service Information

The family of Jane E. Craghead created this Life Tributes page to make it easy to share your memories.

Send flowers to the Craghead family.