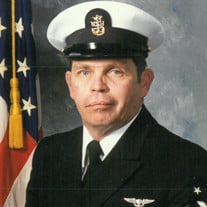 James Michael Kinder was born February 27, 1944, in Geneva, Nebraska, to George Ralph Kinder and Ida Marie (Nelson) Kinder. He died on September 23, 2018, at home in Fort Worth, Texas, at the age of 74 years while recovering from colon cancer. James grew up in Geneva. He attended Kearny State College, in Kearny Nebraska. He was then called to serve in the United States Navy in May 1967. James was married to Lynda Robillos Velasco of Cebu, Philippines on July 30, 1970 and to them four children were born. After their marriage, they spent some time in Plattsmouth and Geneva, Nebraska before James re-enlisted in the US Navy. For the next 30 years, James proudly served his country while living in Alameda, California; on Treasure Island in California; in Duncanville, Texas; San Diego, California; in Grand Prairie, Texas; on Andrews Air Force Base in Maryland; in Corpus Christi, Texas; before his final transfer to NAS JRB in Fort Worth, Texas where he retired in February 2003. James’ greatest pleasure came from his family. He especially enjoyed spending time with his grandchildren. Other activities included fishing and watching sports – mainly Nebraska Cornhuskers college football and Texas Rangers baseball. James was preceded in death by his parents and infant son, Jason Ray Kinder. He is survived by his wife, Lynda; daughter, Josielyn Marie of Pantego, Texas and her son, Giovanni; son, Genesis Michael of Fort Worth, Texas and his children, Aalazah Gonzales of Lubbock, Texas and Daisha and Genesis II of Grand Prairie, Texas; son, Joshua James and his wife, Heather and their children, Brooke and Hillarie of Waxahachie, Texas; sister, Karolyn Lorene (Ardon) Anderson of York and their children Jeffery of Austin, Texas; Jennifer (Eric) Olson of Lincoln, Nebraska; Cynthia of Eagle, Nebraska and Anthony of Lincoln, Nebraska; and several cousins. Funeral services will be conducted at Laurel Land Chapel of Chimes in Fort Worth, Texas on Friday, October 5th at 10:00 am with Certified Celebrant, Jim Ater, officiating. Interment will follow at 1:00 pm at Dallas Fort Worth National Cemetery in Dallas, Texas with Laurel Land Funeral Home in charge of the arrangements. Memorials are directed to the family.

James Michael Kinder was born February 27, 1944, in Geneva, Nebraska, to George Ralph Kinder and Ida Marie (Nelson) Kinder. He died on September 23, 2018, at home in Fort Worth, Texas, at the age of 74 years while recovering from colon cancer. James... View Obituary & Service Information

The family of James Michael Kinder created this Life Tributes page to make it easy to share your memories.

Send flowers to the Kinder family.