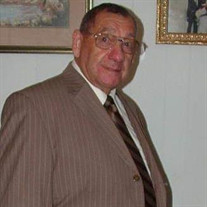 James Arthur "Art" Bolster, 88, passed away Monday Jan 27, 2020. Memorial Service: 12 pm Friday Jan 31, 2020 at Kingdom Hall, 3417 Sidney St, Fort Worth TX. James was born on Feb 15, 1931, the 2nd of 8 children. In 1952 he was married to Evelyn Howe, 3 days after being drafted into the Army. James and Evelyn had 3 children Douglas, Jeffery and Lorrie. He worked in the Silk mill for 12 years then moved to Livingston Manor NY, where he got a job in a poultry plant where we worked for many years. James soon pulled up stakes and moved to Texas where his wifes mother Grace Howe lived. In July of 2004 James lost his wife Evelyn. In May of 2008 after 4 years of single life James met and married Murlene Walker better known as Priss. She did not like the name Art, so she called him James or Honey. After 7 1/2 years of a beautiful marriage Murlene fell asleep on death January 28, 2016.James was a long-time member of the Jehovah's Witness, where he loved to count literature. He is survived and treasured by his children, Jeffery Bolster ( Michelle), Lorrie Kent (Scott), Halretta Carheel ( Johnnie), Shelia Mosley ( Gregory), Sharon Pead ( Thomas) Princella Ridge, Elsie Allen, Eolus Walker (Jackie) and Dewayne Walker; sister, Elsie Squire; brother, Jerry Bolster; and many grandchildren, and great grandchildren.

The family of James Arthur Bolster created this Life Tributes page to make it easy to share your memories.

Send flowers to the Bolster family.