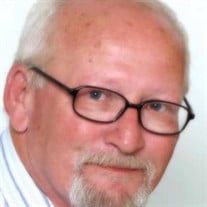 James Allen Boisjolie (AKA Jim or Peepaw) passed away on November 27th 2020 in his home surrounded by his family at the age of 70 from COPD complications. Jim was born May 10th, 1950 in Cooperstown, ND to Wayne and Phyllis Boisjolie. He was the 3rd of 7 children and graduated from Cooperstown High School in 1968. Jim, as an adult, joined the Army and he met his wife Teresa in the service. They married in Copenhagen, Denmark on February, 21, 1980, soon they had a son (Rob) and a few years later a daughter (Sandy). Jim served over 22 years in the Army. When Jim retired from the Army he and his family moved to Hurst, TX. He then worked for the Hurst and Haltom City jails before retiring once again. He kept God close to his heart. He was a lifetime member of the VFW. He enjoyed playing pool, cards, golf, bowling, staying up to date on sports, joining many fantasy sport leagues and going to his kids and grandkids school/sporting events. He was most proud of his family and his time served in the military. Jim always had a way to uplift his kids in whatever they did he said: “just do your best” and also had the best thumbs up routine. Jim was preceded in his death by his sister Mary Pratt (survived by husband Larry) of Cathedral City, CA and his parents, Wayne and Phillis Boisjolie, of Binford, ND. Jim is survived by his wife, Teresa. Son, Robert and his daughter Brenna. Daughter, Sandra (Fiancé Travis) and her son Allen. Siblings Sharon Nelson, Cathedral City, CA, Kathy McNulty, Auburn, WA, Thomas (Colleen) Boisjolie, Everson, WA, Scott (Tatiana) Boisjolie, Vancouver, WA, and Amy (James) Phifer, Bothell, WA and numerous friends, cousins, nieces and nephews. A visitation will be at Guardian Funeral Home, 5704 James Ave, Fort Worth from 4-6 on Monday December 7th 2020. Graveside services will be held at the DFW National Cemetery at 2000 Mountain Creek Pkwy Dallas at 11:30 am on Tuesday December 8th 2020. There will be a memorial on a future date when COVID-19 is less of a concern. Flowers can be sent to the funeral home for visitation or in lieu of flowers consider donating to a charity of your choice. Thank you to all family, extended family and friends for all your kind words and support during this difficult time. Thank you for joining us in celebrating his life and honoring him, whether you are virtual or in person the family feels your love.

James Allen Boisjolie (AKA Jim or Peepaw) passed away on November 27th 2020 in his home surrounded by his family at the age of 70 from COPD complications. Jim was born May 10th, 1950 in Cooperstown, ND to Wayne and Phyllis Boisjolie. He was... View Obituary & Service Information

The family of James Allen Boisjolie created this Life Tributes page to make it easy to share your memories.

James Allen Boisjolie (AKA Jim or Peepaw) passed away on November...

Send flowers to the Boisjolie family.