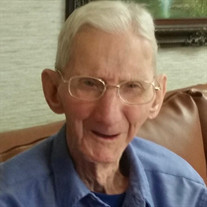 Howard Eugene Jackson, age 97, passed away March 29, 2021, in Fort Worth, Texas. He and his wife, Marilyn Fae Bailey-Jackson, moved from their longtime residence in Enid, Oklahoma to Burleson, Texas in 2007 to be closer to three of their daughters. Howard was born in Walters, Oklahoma on December 21, 1923. He was the fourth of Luther Lee and Ina Zena (Scott) Jackson‘s five children. He attended Walters schools through 8th grade. Howard worked on the family farm harvesting corn, oats and hay. He also tended cattle and kept the farm equipment in working condition. In 1944, Howard served in the army as a Private First Class in the Pacific Theater during World War II. After his discharge in 1946, he returned home and began his long career in the oilfield. He met Marilyn when she brought her father lunch at the drilling site near Asher, Oklahoma. They were married April 3, 1948, in Walters and enjoyed 72 years of marriage. Due to the nature of Howard’s job, the family lived in Walters, Frederick, Medford and Buffalo, Oklahoma before settling in Enid in 1960. Once their daughters began school, they bought a house in Enid where they stayed for the next 47 years. In his spare time, Howard used leftover equipment to build the best, most durable playground equipment for their backyard. Many have fond memories of using wax paper to rocket down the 20-foot high slide or flying high on the metal tractor seat swings. Others enjoyed a gentle breeze from the bench swing. After an oilfield accident, Howard “retired” in 1985. During the next 30 years, he could be found out in the heat tending his numerous gardens or cutting grass on his lawn tractor. When he wanted a break, he stopped at the local coffee shop to shoot the breeze or challenge someone to a game of dominos. Even as the years forced him to slow down, the sight of dominoes or Skip-Bo cards could get his trash talking flowing. Howard was known for the huge amounts of produce from his gardens. Often, grandchildren and other family members sat on their shaded driveway to snap beans and scrape potatoes for canning. They were a great team; whatever Howard could grow, Marilyn would can, and, when there was excess, they would give food to family and neighbors. Howard is survived by daughters Ina L. Melvin, Marla R. Hackett, Rita A. Jackson and husband Kenneth Jackson, and Teresa K. Alcorn. He had eight grandchildren - Andrea D. Melvin; Anica M. (Melvin) Wilson and husband Bryan; Anissa R. (Melvin) Hall and husband Daniel; Anya C. (Melvin) Harness and husband Chad; Kyle G. Hackett, Jeremy D. Hackett, Ian C. Hackett, and Grant C. Alcorn and wife Janet. He had nine great grandchildren - Raina D. Melvin, Gage K. Wilson, Kira R. Hall, Ethan B. Hall, Collin D. Harness, Makenna F. Harness, Hunter W. Harness, Chase O. Harness and Avah M. Alcorn; and a step great-granddaughter Emma Hays, as well as many loving nieces, nephews, and cousins who regularly visited. Howard was preceded in death by his parents; his wife; brothers - Charlie Douglas Jackson, Luther Roy Jackson, and Hubert Arnold Jackson; and sister - Rosie Mae (Jackson) Harris. Per his wishes, Howard was cremated. His remains will be buried at the Walters Cemetery. A memorial for Howard and Marilyn will be held Saturday May 1, 2021 at The Guardian Funeral Home 5704 James Ave. Fort Worth, TX 76134 from 1:00 to 3:00 PM. A time to gather will follow the Memorial Service. In lieu of flowers, the family requests donations to either the Honor Flight (https://www.honorflight.org/donate-online.html) to honor Howard’s military service or the American Red Cross (https://www.redcross.org/donate/donation.html/) to honor Howard and Marilyn’s commitment to blood donation.

Howard Eugene Jackson, age 97, passed away March 29, 2021, in Fort Worth, Texas. He and his wife, Marilyn Fae Bailey-Jackson, moved from their longtime residence in Enid, Oklahoma to Burleson, Texas in 2007 to be closer to three of their daughters. Howard... View Obituary & Service Information

The family of Howard Eugene Jackson created this Life Tributes page to make it easy to share your memories.