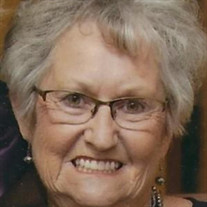 Helen June Powell, 84, passed away on Saturday, September 18, 2021, in Arlington, Texas. Helen was born on May 10, 1937, in Mena, Arkansas to Buster and Delcie Lyda. Her father was a Pentecostal preacher with a church in the hills of Arkansas. She often told stories of growing up in Arkansas and traveling with her family all over the United States picking crops and cotton to make extra money. Her eyes would light up retelling the stories of her childhood and the times spent with her family. She married Bob Wood on July 14, 1956, and they moved to Fort Worth, Texas. Helen and Bob had four children, Arnold Wood, Teresa Wood, Ginger Guhl, and Marty Wood. Bob Wood passed away on April 18, 1981. After Bob’s passing, Helen went to work for Ben E. Keith Company. She was successful in working her way up to a supervisory role in the payroll accounts department. On September 17, 1987, Helen married Jim Powell. They both had a passion for traveling and spent most of their free time seeing as many places in the United States as possible. Helen retired from Ben E. Keith on September 1, 2005. Helen was a loving and caring wife, mother, grandmother, neighbor, and friend to many. She was known for being spunky, independent, and outspoken. She was a lover of dogs and deeply loved her two dogs Chicka and Lilly. Helen was an active member of Pleasantview Baptist Church in Arlington, Texas. She was preceded in death by her parents, Buster and Delcie Lyda; brother, Weldon Lyda; husbands, Bob Wood, and Jim Powell; and daughter, Teresa Wood. Survivors: Betty Lyda Nichols, sister; Gene Lyda, brother; Earl Lyda, brother, Lyndell Lyda, brother; Arnold Wood, son and daughter in law, Jan Callaway Wood; daughter, Ginger Guhl and Kevin Guhl son-in-law; and son, Marty Wood; grandchildren, Bobby Head and Monique Metcalf; Jessie Faye King and husband, Jereme King; Allen Head and wife Katherine Head, Josh Wood, and wife Brandi Wood; and Tara Wood Medford and husband Jordan Medford. She was blessed with five beautiful great grandchildren, BreeAnn Head, Ellie Medford, Lincoln Medford, Rylan Wood, and Nolan Wood.

Helen June Powell, 84, passed away on Saturday, September 18, 2021, in Arlington, Texas. Helen was born on May 10, 1937, in Mena, Arkansas to Buster and Delcie Lyda. Her father was a Pentecostal preacher with a church in the hills of Arkansas.... View Obituary & Service Information

The family of Helen June Powell created this Life Tributes page to make it easy to share your memories.

Send flowers to the Powell family.