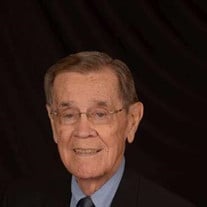 The Rev. Dr. Gilbert “Gil” Ferrell, retired United Methodist pastor, urban missioner, and seminary professor, died June 20th, 2018. He was 94. A service of worship, in which he will be remembered, is set for Sunday, June 24th, at 5:00 p. m. at First United Methodist Church, Fort Worth. Former colleagues and students will officiate. Born in Denton County, Gil Ferrell moved with his family to Fort Worth in 1930 on his sixth birthday. He was a 1941 graduate of Polytechnic High School and earned degrees from Texas Wesleyan University and Perkins School of Theology at SMU. Texas Wesleyan honored him with a Doctor of Humane Letters degree in 1985. Among the Fort Worth area United Methodist churches of which he was pastor are Saginaw, Smithfield, Richland Hills, and Polytechnic. He developed the Metropolitan Board of Missions and was its executive director the first thirteen years of its existence. He retired from the faculty of Saint Paul School of Theology in Kansas City in 1989. He continued to teach at Brite Divinity School at TCU, 1989-2002, and for most of those years was also on the adjunct faculty at Perkins School of Theology. He is survived by his beloved wife of 69 years, Dorris Renfro Ferrell, sons Jeff (and his wife, Karen) and Joel; a nephew, Michael Ferrell (and his wife, Sue) and a niece (Tracy Englert (and her husband, Brad), along with three great nephews, two great great nephews and two great great nieces, and a host of cousins. His only brother, Thomas J. Ferrell, died in 1971, and his parents, Patrick and Mamie Brashears Ferrell, died in 1971 and 1976. The family suggests that in lieu of flowers memorials may be given to Texas Wesleyan University or Brite Divinity School at TCU, or to a local charity such as NICA, Meals on Wheels, United Community Centers, or Tarrant Area Food Bank.

The Rev. Dr. Gilbert &#8220;Gil&#8221; Ferrell, retired United Methodist pastor, urban missioner, and seminary professor, died June 20th, 2018. He was 94. A service of worship, in which he will be remembered, is set for Sunday, June 24th, at... View Obituary & Service Information

The family of Rev. Dr. Gilbert "Gil" Ferrell created this Life Tributes page to make it easy to share your memories.

Send flowers to the Ferrell family.