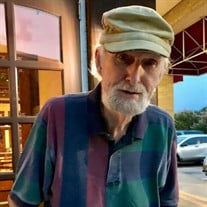 In a chair reading a book is where you would find him, an owlish gaze behind big spectacles. When his mother taught George Drake Bush to read, he could, to his glee, track the daily baseball news, a union of the things he loved most. He was born in Cincinnati, Ohio on September 22, 1937. When he was a boy, Grand-Daddy would take him to watch the Cincinnati Reds play. Grand-Daddy got in free because of his Preacher’s Pass; Drake got in free because he could walk under the turnstile. Drake’s boyhood was a world of comic books, baseball and the sound of The Lone Ranger galloping across the land on the radio. At Oak Ridge High School he was "Boogie Bush" because of his whiz-bang style of dancing the jitterbug. It was during this time, on a junior class bus trip to Virginia, that he met a pretty girl named Mary Normand, or “Murry” as he would call his wife-to-be for the next 63 years. After high school, Mary enrolled at Texas Christian University while he went to the University of Tennessee. He was so miserable without her that he dropped out, hitchhiked to Fort Worth, and worked for months in a slaughterhouse while he convinced Mary to enroll at UT, which she eventually did. They married in 1957 and his two daughters, Marylou and Kelly, followed. Although Grand-Daddy wanted him to be a Baptist preacher, Drake became a college textbook editor. He delighted in visiting college campuses, forming strong bonds with authors and turning colleagues into lifelong friends. Playing tennis also brought rich friendships, and many pleasurable hours were spent at his beloved TCU courts, where he was “King Rat” if he won all sets. In a world of, in his words, “gaggles of googles, twitters, tweets, and twits” the simple things gave him deep contentment: reading, jazz, sports, old friends, writing poetry, letters to his grandchildren. When Parkinson’s disease overtook Mary it also overtook his ability to care for her. But there he was, visiting her in the nursing home almost daily. She was still the girl from the bus, he knew, and he’d blow her kisses as he’d say goodbye. Drake was 83. He is survived by Mary, Marylou Kraemer, Kelly and her husband Chris Harper, and his grandchildren Sarah and Jeremy Faulkner and Jake and Megan Harper.

In a chair reading a book is where you would find him, an owlish gaze behind big spectacles. When his mother taught George Drake Bush to read, he could, to his glee, track the daily baseball news, a union of the things he loved most. He was... View Obituary & Service Information

The family of George Drake Bush created this Life Tributes page to make it easy to share your memories.

In a chair reading a book is where you would find him, an owlish...

Send flowers to the Bush family.