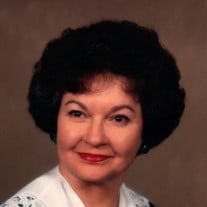 Dorothy Sue Carlton, 81, passed away January 5, 2018. Memorial service: 12:30 p.m. Saturday at Laurel Land Chapel of Chimes in Ft. Worth. Born September 8, 1936 in Cleburne, Dorothy grew up in Ft. Worth, the oldest of five children. She and her husband Gene moved to Irving in 1967, where they raised four daughters and became active members of the community. They retired to Edgecliff Village, a couple of miles from where they had grown up. An excellent student, she graduated from Technical High School, where she was an ROTC sponsor and had the lead in the senior play. Dorothy was very civic-minded and served as PTA president at Thomas Haley Elementary School and director of the Youth Department at North Irving Baptist Church. She loved to create beauty, both in her home and community, which led to her serving on the Irving Planning and Zoning Commission for several years. She was excited to contribute to improving the city she loved. One of her proudest accomplishments was her pivotal role in raising financial and community support to build the original Castle Kingdom playscape at Victoria Park in 1989. Patriotic to the core and passionate about politics, Dorothy worked several political campaigns, served as precinct chairman for many years, and was a delegate to both the state Democratic convention and the state Republican convention. Dorothy loved flowers and had a knack for creating beautiful arrangements. Stopping to smell the roses was not only her pleasure, but also her personality. Curious by nature, the slightest thing could catch her interest, and she would stop to explore - - often to the chagrin of her family. She had a lovely singing voice and adored musicals, introducing her daughters to Casa Manana from an early age. She loved to entertain and was a gracious Southern hostess. Upon retirement, she and Gene were members of Wedgwood Baptist Church and enjoyed wonderful friendships there and at the Edgecliff Village Fellowship. She sang with the Travis Avenue Baptist Church Senior Choir and traveled the United States with her husband. We rejoice that she is in the presence of her Lord Jesus Christ and reunited with so many of her loved ones. Dorothy is preceded in death by Gene, her husband of 62 years; parents Carl and Loyce Hollingsworth; brothers Dale and Don Hollingsworth; sister Doris Spharler; son-in-law Mark Hetherly; and grandson Donovan Walker Floyd. She is survived by four daughters, Liz Kinnan and husband Roy of Austin, Karen Wong and husband Steve of Grand Prairie, Paula Barton and husband Rick of Austin, Lory Floyd and husband Phil of Denver; seven grandchildren; six great grandchildren; sister Diann Whitehead and husband Bill of Springtown; brother-in-law Bill Carlton Jr. and wife Ruby of Burleson; and many friends and family.

Dorothy Sue Carlton, 81, passed away January 5, 2018. Memorial service: 12:30 p.m. Saturday at Laurel Land Chapel of Chimes in Ft. Worth. Born September 8, 1936 in Cleburne, Dorothy grew up in Ft. Worth, the oldest of five children. She and... View Obituary & Service Information

The family of Dorothy Sue Carlton created this Life Tributes page to make it easy to share your memories.

Send flowers to the Carlton family.