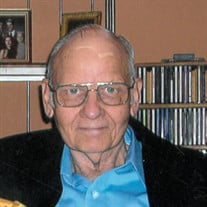 Don Lee Pearson, 89, of Fort Worth, a loving husband, father and grandfather, passed away on Tuesday, December 22, 2020. He was born on August 20, 1931 in Austin, Texas to Charles and Georgia Pearson. Don honorably served in the United States Navy aboard the Submarine, USS Carp. He was a Korean war Vet. Don was known in Lake Country, the community he lived in, as the “Old Man” who walked and pushed a wheelchair with American Flags flying from both handles. Any new neighbors to the community soon got to know him and always stopped to offer him a ride which he politely refused because he used the wheelchair to haul his found treasures. I wish there was a way to tell the story of this remarkable man. He was not my biological father. He never had any biological children. Don was ten years younger than my mom...and only 13 years older than me. Yet at the age of 26, he stepped up to the plate to become my Dad. And he has been the best Dad a girl could ever have. Don has been there for me and my two children no matter what. Without him I would not be the person I am today. He was preceded in death by the love of his life, Jacquelin “JoElla” Pearson, brother, Ernie Pearson, and son-in-law, David Lancaster. He is survived by his daughter, Billie “BJ” Lancaster, grandchildren, Michael Smith, and Melissa Floor, both of Fort Worth, TX; seven grandchildren; four great-grandchildren; niece, Dawn Chastant of Pearland, TX; and nephew, John Michael Pearson of San Antonio, TX. A Celebration of Life will be held at a later date at Lakeview Fellowship. He and his beloved will be interred together at Austin Memorial Park. Arrangements are in the care of Guardian Funeral Home.

Don Lee Pearson, 89, of Fort Worth, a loving husband, father and grandfather, passed away on Tuesday, December 22, 2020. He was born on August 20, 1931 in Austin, Texas to Charles and Georgia Pearson. Don honorably served in the United States... View Obituary & Service Information

The family of Don Lee Pearson created this Life Tributes page to make it easy to share your memories.

Send flowers to the Pearson family.