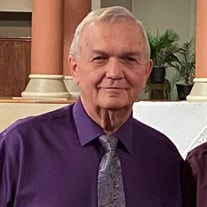 David Mark Mazurek age 72 of Crowley, TX, was born April 6, 1949 in Benson, Minnesota to Albert and Ruby Mazurek. David graduated from Benson High School in 1967. He was drafted into the United States Air Force where he was trained to be an airplane mechanic and quickly rose to supervisory ranks. He served overseas in the Vietnam war/conflict and was honorably discharged after 11 years. David was united in marriage September 14, 1968 at Sheppard Air Force Base to Colleen. David & Colleen were high school sweethearts and were married for 2 weeks shy of 53 years. Family time was important to him and he often put others in front of himself. David loved and served the Lord from the time he was a young man until he joined our Savior, Jesus Christ on August 31, 2021. He was a longtime member of Saint Andrews Catholic church as well as Saint Francis Village Catholic church. David was devout in his faith and was active in bible study and ministry in the church. David was a 4th degree Knight in the Knights of Columbus and helped to start and grow 2 different chapters, one in MN and the other in TX. Throughout his life, David enjoyed family time, camping, fishing, woodworking, traveling, cooking, watching westerns, dancing with Colleen and he loved his pets, especially his Bichon Frise, Chelsea Mae. He was quick to take those in need into his home and give them safety and love. They often became family that he and Colleen chose as daughters and granddaughters. After God, the most important part of this world was his wife, Colleen. David adored her and went out of his way to love and care for her. People have often asked Colleen if Dave always opened the door for her to which she answered, yes. Although our time with him has been cut short, his spirit boldly lives on in his two daughters: Dana and Christy and his four grandchildren; Jordan, Alyxes, Stephanie and Kale. He is survived by his loving wife, Colleen Mazurek, daughters Dana Mazurek (Kim) of Spring, TX, Christy Herrera (Frankie) of River Oaks, TX & chosen daughter Melissa Pelton (Joey) of Ft Worth. His grandchildren Jordan Mazurek of Ft. Worth, Alyxes Martinez (Wesley) of Ft. Worth, Stephanie Sierra (Logan) of Ft. Worth, and Kale Mazurek of Spring. His siblings Ann Ascheman of Benson, MN, Patricia Mills of Hanover, MN, Karen Wilson (Orrin) of Hancock, MN, Connie Yost (Phil) of Murdock, MN, Joseph Mazurek (Julie) of Mound, MN. He is preceded in death by his parents; Albert in 1984 and Ruby in 2019. Rosary & Mass livestream link: www.standrewcc.org

David Mark Mazurek age 72 of Crowley, TX, was born April 6, 1949 in Benson, Minnesota to Albert and Ruby Mazurek. David graduated from Benson High School in 1967. He was drafted into the United States Air Force where he was trained to be an... View Obituary & Service Information

The family of David Mark Mazurek created this Life Tributes page to make it easy to share your memories.

Send flowers to the Mazurek family.