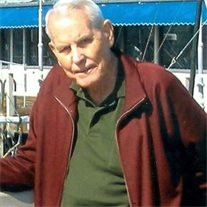 FORT WORTH -- Charles Drew (C. D.) Sealey, 87, passed away on Saturday, the 11th day of December, at his home after a courageous battle with cancer. Memorial Service: 10 a.m. Wednesday, at Guardian Funeral Home. Memorials: In lieu of flowers, memorials may be made to YMCA of Metropolitan Fort Worth, 540 Lamar, Fort Worth, Texas, 76112. Charles Drew Sealey was born on July 25, 1923, in Austin, Texas to Julius and Martha Elizabeth Sealey. Upon the death of his father, C.D. was raised and educated at Masonic Home and School in Fort Worth, Texas. C.D. was the quarterback of the Masonic Mighty Mites football team that was written about in Jim Dent's book, Twelve Mighty Orphans. While at the Masonic Home, he met and then later married Erline Alderson. He joined the Marines as a Paratrooper at the beginning of World War II and then returned home after being wounded. After graduating from college, he chose the career of teacher and coach with Callisburg High School for two years and then for FWISD. C.D. retired from FWISD in 1981 as a home school coordinator after 30 years. Mr. Sealey was a 60 year member of Polytechnic Masonic Lodge 920 and a dual member of Godley Masonic Lodge. He served as Past Master of Poly Lodge. He was a servant leader to his brothers in the lodge and his students, as well as anyone who needed his assistance. Upon retirement, he was able to continue and expand his love of traveling and constantly being on the go. One of his favorite things to do was to get in the car and just drive with no specific destination. C.D. was loved, respected and admired by all with whom he came in contact. In 1980, he met and married Joella Mims, with whom he had 30 wonderful years. He loved his children and family and enjoyed being involved in the lives of his grandchildren and great-grandchildren. He will be greatly missed by all who knew and loved him. C.D. was preceded in death by the mother of his children, Erline; brother, Murray; brother-in-law, Spooks Hall; and nephew, Gary Hall. Survivors: Beloved wife of 30 years, Joella Mims Sealey; daughters, Sharon Smith Hinson and husband Woody of Fort Worth, and Kay Sealey Vanderbilt of Granbury; step-children, Sue Warren of Grapevine, Peggy Fields of Joshua, and Alan Mims and wife Stephanie of Colleyville. He had nine grandchildren; Lisa, Larry, Randy, Angie, Lisa Marie, Griffan, Scott, Amanda, and Emily and fourteen great-grandchildren. He also had 2 sisters, Agnes Hall of Fort Worth, and Niela Shelton of Haslet.

FORT WORTH -- Charles Drew (C. D.) Sealey, 87, passed away on Saturday, the 11th day of December, at his home after a courageous battle with cancer. Memorial Service: 10 a.m. Wednesday, at Guardian Funeral Home. Memorials: In lieu of flowers,... View Obituary & Service Information

The family of Mr Charles "CD" Sealey created this Life Tributes page to make it easy to share your memories.

Send flowers to the Sealey family.