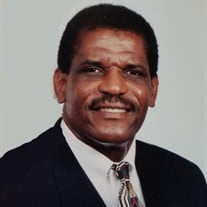 Carl Winston Oliver Daniels, 77, of Trophy Club, passed away Monday, May 18, 2020. Carl was born in St. Paul Parish, Antigua on March 8, 1943 to George and Georgette Andrew Daniels. He grew up in Sweets, Antigua and later moved to England as a teenager. He married the love of his life, Yvonne Gloria Williams, March 30, 1968. Carl joined British Telecom as an engineer and his career in telecom spanned over 30 years. He and his family moved to the United States in 1984 where he continued to work at MCI and WorldCom. Carl's hobbies included playing golf, tennis, dominoes and card games of all sorts. He was a huge sports enthusiast, including his beloved teams- the Dallas Cowboys, Dallas Mavericks and West Ham United. Carl became a deeply religious man after he found the Lord in the mid 80's. He was passionate about caring for his wife, his faith in God and his love for his children, grandchildren and family. Those who preceded Carl in death are his parents and brother John Daniels. Carl is survived by wife of 52 years, Yvonne; children, Brenda Barton, Courtenay Daniels, Paul Daniels and Trudy-Ann Daniels; and grandchildren, Brendan Harriette, Caleb Daniels, Faith Daniels, Noah Daniels and Lathan Daniels; and siblings, Pam Daniels, Charles Daniels and Amina Daniels. The family of Mr. Daniels would like to extend a special thanks to the nurses and staff of Mansfield Rehab and Nursing Facility and Carepath, recognizing his caregivers Candy, Shalla and Denise for all the love and compassion shown. Also, we want to thank Jennifer, Sherry and Celia for stepping in to help so willingly. We'll never forget it. Mr. Daniel's Celebration of Life will be live streamed on The Church at Trophy Lakes (Official Group) Facebook. https://www.facebook.com/groups/TheChurchAtTrophyLakes/?ref=share If you would prefer, you may make a donation in lieu of flowers to the ALS Association. https://secure2.convio.net/alsa/site/Donation2?df_id=37513&mfc_pref=T&37513.donation=form1

Carl Winston Oliver Daniels, 77, of Trophy Club, passed away Monday, May 18, 2020. Carl was born in St. Paul Parish, Antigua on March 8, 1943 to George and Georgette Andrew Daniels. He grew up in Sweets, Antigua and later moved to England... View Obituary & Service Information

The family of Mr. Carl W. O. Daniels created this Life Tributes page to make it easy to share your memories.

Send flowers to the Daniels family.