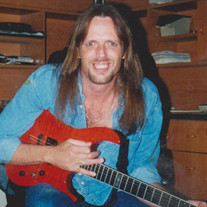 Brian Scott Penn, 50, passed away December 27, 2016. Brian was born in Kermit, Tx, on June 17th, 1966, at 7:54 A.M. His mother fell in love with him instantly and noticed the dimple in his chin which she adored. At an early age, he spoke clearly and was an eager learner, earning exceptional grades in school. His artistry surfaced when he started to copy cartoons around the age of five and continued to advance well into his adult years. After turning thirteen, he started to lead Bible studies with his cousins. Brian Penn was loved by all who knew him. He was a talented artist, a skilled guitarist, and a beloved son, a loving father, and a protective big brother. He was also an excellent employee as a Graphic Art Specialist at 4 Color Press in Fort Worth. He had a wonderful sense of humor even when he wasn’t trying and cherished time with family; he loved coffee, dogs, martial arts, and rock music, his favorites being Elvis, KISS and Led Zeppelin. His enthusiasm in his interests was infectious, often creating interest in others as well. He was thankful for his loyal friends, Kenny and Devin. He credited Kenny as his mentor in teaching him computer skills, and enjoyed camping with Devin. Brian was preceded in death by his papa and nanny, whom he treasured, always believing them to be the best grandparents anybody could have. He is survived by his mother and her husband whom he viewed as a father, Sharon and Floyd Mason, his father, Kelsey Richardson along with his wife, Barbara, his sons, Jerry and Kris Penn and his wife, Shana, his sister, Jackie Horn, his nephew, Nicholas Horn, his nieces, Jessie and Tessa Horn, his aunt Marsha Frederick, whom he lovingly called Barsha and Horse as a toddler, his uncles Jerry and Ellwood Hays along with his wife, Dorothy, his cousins, Keith Hays, Sam Belanger, Jeannette Hays, and Victoria and Esther Frederick. Brian, we will always remember you with the warmest of thoughts. You hold a special place in our hearts and the love we have for you will continue to live on.

Brian Scott Penn, 50, passed away December 27, 2016. Brian was born in Kermit, Tx, on June 17th, 1966, at 7:54 A.M. His mother fell in love with him instantly and noticed the dimple in his chin which she adored. At an early age, he spoke clearly... View Obituary & Service Information

The family of Brian Scott Penn created this Life Tributes page to make it easy to share your memories.

Send flowers to the Penn family.