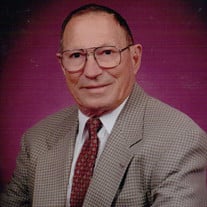 Bonnie Lee Roberts was born on October 19, 1923 in Phenix City, Alabama, to John Jeremiah and Octavia Odessa Roberts. Both of his parents died before his 13th birthday, and he was raised by various aunts and uncles until the age of 18. At the age of 18, he joined the army, and volunteered for the 82nd Airborne because it paid $50 more a month than the regular army. He served in Sicily, England, France North Africa and Holland. His medals include, among others, a Purple Heart with an Oak Leaf Cluster, Bronze Star, and Good Conduct Medal,. While stationed near Weatherford, prior to going overseas, he met his future wife, Louise, and they married in 1945, just after he was discharged from the military. They were married for 71 years. They had 2 children, David Lee, deceased, and Diann. He worked for the federal government, first at the General Depot, in Fort Worth, and then for the Department of the Navy as a quality assurance inspector until his retirement. Upon his retirement, Bonnie and Louise bought an RV and spent much of their time traveling. They were active in an RV travel club, and enjoyed all kinds of travel, including cruising. Their travels were highlighted by a trip to Normandy in 2004 to commemorate the 60th anniversary of D-Day. He was active in the Crowley Methodist Church until they relocated to Carrollton in 2014, to be closer to their daughter. He was active in Methodist Men and took part in the Walk to Emmaues. He was a 32nd Degree Mason, a member of the Moslah Shrine Temple, the 82nd Airborne Association, the Purple Heart Association and the 504th Association. He has a sister and a brother who preceeded him in death. He is survived by his wife Louise, daughter Diann Bowen and husband Wayne Bowen; grandson Aaron Bowen and wife Melissa, and great grand children Sydney Caroline and Elliot Marshall; and neices and nephews. In lieu of flowers, donations can be made to Crowley United Methodist Church.

Bonnie Lee Roberts was born on October 19, 1923 in Phenix City, Alabama, to John Jeremiah and Octavia Odessa Roberts. Both of his parents died before his 13th birthday, and he was raised by various aunts and uncles until the age of 18. At... View Obituary & Service Information

The family of Bonnie Lee Roberts created this Life Tributes page to make it easy to share your memories.

Send flowers to the Roberts family.