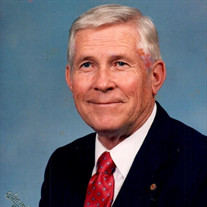 Bobby G. Jones, 87, of Fort Worth, Texas, passed away Sunday, February 14, 2021. He was born in Fort Worth, Texas, on December 13, 1933. He was a graduate of Poly High School. He was married to Wanda F. (Rogers) Jones on October 5, 1951 in Fort Worth, Texas. They were married 55 years at the time of her death in 2006. Bobby retired from the United States Postal Service after 25 years. Bob was a lifetime member of Wesley United Methodist Church and was Sunday School superintendent for over 25 years. He was an avid fisherman and loved spending his summers in Lake City, Colorado. He loved taking his grandkids with him and Nanny to share their love of the mountains. He taught them to fish, dig for worms up the Henson, drive the boat on the trailer, how to start campfires, going to play Bingo, and most importantly, how to gut fish. At night they would have potluck dinners with all the other camp families. Before bed, he enjoyed playing games with the grandkids. In the past several years he loved going on trips in the summer with his two daughters, Susan and Rhonda. You could tell how excited he was because he would pack his bags weeks ahead of time, surf his computer for places to see and be ready to leave at the crack of dawn. He would talk about the trips and how much fun he had with his daughters and begin planning his trip for the next summer. He also had another passion, going to the Casino’s. He & his buddy Cecil would leave at 4 am, drive to the Casino and be back by 2 pm for a nap before dinner. They each used scooters to get around, and they could be caught having scooter races in the hallways of WinStar. Dad always won the races which he loved to brag about. He was very active in the lives of his children, grandchildren and great grandchildren. He loved hanging out with them every chance he got. He valued his family, and the time he got to spend with each one. He said many times that he was very blessed to have such a loving family. He knew he was deeply loved by all, and the whole family knew he loved them. He always had a smile on his face and never met a stranger. No one ever met Dad that didn’t love him immediately. He was that kind of person. The world would be a better place with more people like Bob. Bob was preceded in death by his wife, Wanda Jones; his parents, Jim & Beulah Jones; and 3 brothers - Leroy, Bill & Jimmy Ray Jones. He is survived by: Children: Susan Austin and husband Wayne Austin Rhonda Choudhary and husband Ranga Abeygunawardena 9 Grandchildren: Trey Wilson & wife Amanda, Wesley Wilson & wife Charity, Sasha Perry & husband Sam, Kevin Austin & wife Aldebaran, Rehana Allsup & husband Daniel, Ryan Austin & wife Kim, Tim Choudhary & wife Amanda, Tia Choudhary & fiance Kimber, and Courtney Boliver 16 Great Grandchildren: Bobby Curtis Wilson, Matthew Wilson, Hayley Stout & husband Michael, Will Wilson, Victoria Jordan, Emily Jordan, Mason Jordan, Harley Perry, Hannah Austin, George Austin, Madilyn Allsup, Sydney Allsup, Pyper Allsup, Jasmyn Allsup, E’owyn Choudhary, Scarlett Boliver, and McKenzie Austin A graveside service will be held on Friday, February 26th at Noon. No visitation due to COVID. In lieu of flowers, memorials can be made to the American Diabetes Association in Dad’s honor.

The family of Bobby Gene Jones created this Life Tributes page to make it easy to share your memories.

Send flowers to the Jones family.