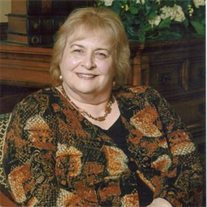 Beloved Mother, Sister, Grandmother “Barb” was born Barbara Jean Sharp in Jeffersonville, Indiana on May 31st, 1941. She was the eldest of 5 children and the only daughter born to Boyd and Lorine Sharp. Barbara graduated from Palmdale High School in 1959 where she was an active member of CAP. Throughout her life she completed many college courses and certificate programs with her main focus on journalism. She was a published author with many articles in various newspapers and magazines. She wrote and shared a very special Christmas story for the family and she had aspirations of finishing the she novel had worked on throughout the years. Barbara became Mrs. Wendell Douglas Faulkner on March 27th, 1963. She loved and raised four children; Michael, Dora, Sherry and Wendy which resulted in 9 Grandchildren and 5 Great Grandchildren. Wendell preceded Barbara in death in 1998 which was the year they celebrated their 35th wedding anniversary. Barbara was articulate and very organized. She served many years in the administrative field before happily retiring in 2004. Barbara lived in California before moving to Texas in 1983. For the last three years Barbara resided at the Evergreen Active Seniors Community in Keller, Texas where she befriended many people. For the last two years she was the leader of the Evergreen Quilters Guild an organization of quilting residents that together have made hundreds of quilts to be donated to Quilting for Babies. This was Barbara's passion and would frequently sew into the wee hours of the morning. Barbara was also an active member of The Bear Creek Quilters Guild and the Grapevine Quilters Chat. Barbara was a very giving and caring person who always put the needs of others before her own. She was loved dearly by all those who knew her and was very sentimental of family tradition. Barbara played an active role in the raising of her Grandchildren and Great Grandchildren. She will forever be in the hearts of all that she touched, We were privileged to call such a wonderful, beautiful lady, Mom, Sister Gramma and friend.

Beloved Mother, Sister, Grandmother &#8220;Barb&#8221; was born Barbara Jean Sharp in Jeffersonville, Indiana on May 31st, 1941. She was the eldest of 5 children and the only daughter born to Boyd and Lorine Sharp. Barbara graduated from... View Obituary & Service Information

The family of Mrs Barbara Jean Faulkner created this Life Tributes page to make it easy to share your memories.

Send flowers to the Faulkner family.