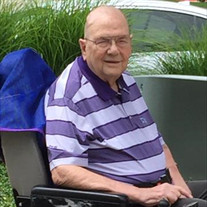 Aubrey Homer Brannon, 87 of Burleson, passed away on Saturday, May 28, 2016. Memorial Service: 2:00 pm Wednesday, June 1, 2016 at Worth Baptist Church, 4900 Campus Drive, Fort Worth, TX 76119. Aubrey was the seventh child born to Charles Clinton and Alice Leona Kemp on September 16, 1929, in Roscoe, TX. He graduated from Lorraine High School in Lorraine, Texas and received a Bachelor's degree from Texas Christian University. Aubrey married Janette Nalley on January 27, 1950 and were married 68 years. Preceded in death by his parents, Charles and Leona Brannon; brothers, Charles Brannon, JW Brannon, Clinton Brannon; sisters, Zonelle West, Cecil Marie Coates, and Mary Martha Brannon and grandson Michael Keith Hodge III. He is survived by his wife, Janette; children, Terry Brannon and wife Cecilia of Tyler, Texas and Lori Hodge and husband Michael of Burleson; five grandchildren and twelve great grandchildren, with another due in September. Aubrey worked as an Engineer for General Dynamics and LTV and retired from Westinghouse Corporation in Baltimore, Maryland. He found his passion following retirement in teaching others; as a substitute teacher at Burleson High School and teaching Spanish to senior citizens. He was a self-taught pianist and would play for hours as his health allowed. He was a US Marine Corps veteran, member of Worth Baptist Church, and a Mason. Nay, in all these things we are more than conquerors through him that loved us. For I am persuaded, that neither death, nor life, nor angels, nor principalities, nor powers, nor things present, nor things to come, Nor height, nor depth, nor any other creature, shall be able to separate us from the love of God, which is in Christ Jesus our Lord. -Romans 8:37-39

The family of Mr Aubrey Homer Brannon created this Life Tributes page to make it easy to share your memories.

Aubrey Homer Brannon, 87 of Burleson, passed away on Saturday,...

Send flowers to the Brannon family.