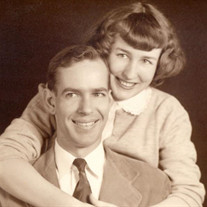 Arleigh Ferdinand Strasser 93 of Burleson, Texas, passed away peacefully on February 14, 2018. He was born June 13, 1924 in Greenbush, Kansas to Fred and Mabel Strasser. He had 2 sisters Marie and Lorena. He was baptized and raised in the Catholic church. He married Ina Rue O'Neal on October 13,1952. He is survived by his wife of 65 years , his son Neal and wife Vicki, daughter Michelle, daughter Valerie, daughter Joan and husband Jeff, 7 Grandchildren, 16 Great Grandchildren and another on the way. Arleigh was drafted into the Army Air Corps June 16, 1943 until January 24, 1946. He received a Presidential citation for his work on Anguar Island in Palau. He started work at Welex 1952 and transferred to Jet Research Center in 1955, both Halliburton companies. Except for 2 years when he worked for Brown & Root as manager of grounds at the new JRC plant where he got to do his loved dirt work, he was the QC Manager for JRC until he retired in 1988. Woodwork began about 1956 designing and building parts for JRC. His one man company Precision Wood Products started then and continued until after retirement . He built furniture , toys etc.. for his family and neighbors and other companies that ordered various things. This covers a period of about 60 years. Occasionally a small dirt moving job was needed .This was his favorite job. Woodworking and dirt moving continued after retirement , building for family and small jobs building county roads etc.. Arleigh was a devoted husband , father, Grandfather , Great-Grandfather, and friend that is missed but will not ever be forgotten. Together with our mother, they taught the family to love God, love and care for family and friends, be honest , work hard and never give up. He was so very proud of his family as we were of having him as our Dad. - In lieu of flowers to make donations to St Ann's Catholic Church in Burleson.www.stanninburleson.com

Arleigh Ferdinand Strasser 93 of Burleson, Texas, passed away peacefully on February 14, 2018. He was born June 13, 1924 in Greenbush, Kansas to Fred and Mabel Strasser. He had 2 sisters Marie and Lorena. He was baptized and raised in the Catholic... View Obituary & Service Information

The family of Arleigh Ferdinand Strasser created this Life Tributes page to make it easy to share your memories.

Send flowers to the Strasser family.